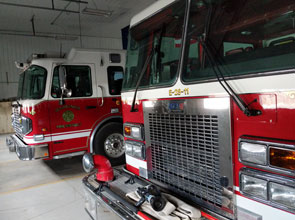 Small towns usually have difficulty filling volunteer jobs, and Gardiner has been no exception. Often, single candidates run unopposed for Fire District Commissioner. While one Commissioner’s seat was contested in the December, 2010 election, the winner in that election won by a single vote―24 to 23.  The recent December, 2011 Fire District election, however, saw 297 ballots cast out of 3,284 registered voters.

In the recent election Luke J. Lyons, current Chairman of the Commission, ran unopposed for a five year term and received 220 votes. Christian “Bill” Ecker, 2011 President of the Gardiner Fire Department, ran against David Sides to fill the unexpired term of Commissioner Erik Holter. Bill Ecker received 170 votes against Dave Sides’ 121 votes. Beverly Tantillo, current Treasurer of the Gardiner Fire District, ran unopposed for a one year term as Treasurer and received 234 votes. A proposition to make the Fire District Treasurer position an appointive rather than elective position commencing January, 2013 passed with 176 yes votes to 94 no votes.

When asked to comment after the election results were announced, Bill Ecker said, “I want to thank the voters for coming out in such numbers and showing that a larger portion of citizenry can be proactive with regard to the Fire District. I look forward to working on behalf of all our citizens. In Gardiner the Fire Department is a volunteer service. I’ve been doing it for forty-five years for the welfare and safety of the residents of the town and their property. Some of the biggest hurdles we have now are state mandates and the hundreds of hours required of members of the Fire Department to become qualified and stay qualified. The rules have changed drastically over the years. A lot of people join but, when they find out the requirements, about 50% of new members don’t stay. It’s dirty work.”

Dave Sides said, “I congratulate Bill Ecker on his election and applaud our citizens for demonstrating greater interest in Fire District matters by turning out in such numbers to vote. I look forward to continuing to serve the community by working with the Fire District to promote fiscal responsibility and controls, open communications and transparency.