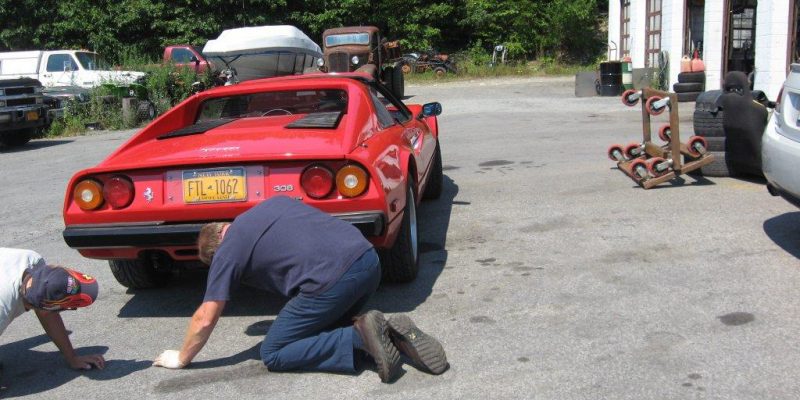 Beeks: A Wealth of Automotive Information

Derick Karabec was looking under a client’s car and chuckling to himself when I arrived at Beeks. Asked what was so funny, he said, “This guy always takes the exhaust off his cars’ mufflers and replaces them with other mufflers to change the sound, making it louder, softer, huskier, higher or lower.”

Derick has worked at Beeks garage at the intersection of 299 and 44/55 for 25 years. He’s been the owner for the past 20. Derick acquired the foundation of his prodigious skills from the former owner and a previous job. Maintaining those skills in the face of ever-changing technology involves attending seminars—sometimes four or five a year.

Derick has a loyal and respectful following of people who, he says, service their cars regularly. He added that a common failing among car owners generally is underestimating the importance of oil changes.  Despite what some car manufacturers state, conventional oil should be changed every 3,000 miles and synthetic oil every 5,000.  Failing to do this hurts the engine.

Comparing older models to today’s cars, Derick noted that cars last as long as they do now thanks to computer-operated fuel injection; it keeps cars going for 200,000, even 300,000 miles. Older models had carburetors instead, which thinned out the oil and made the engine fail. Older models also needed tune ups twice a year. Currently a tune up is called for every 100,000 miles.  “Customers don’t have to see me that often!” he said, cheerfully. On the other hand today’s models will never become classics since you can’t buy parts for them once they’re ten years old.  In addition, while Derick predicts that in our lifetime cars will become increasingly efficient, he does not foresee sweeping changes because the computer technology won’t be cost effective.

Derick also sees a problem with the safety components currently in use.  “You want to be in control, otherwise there’s the option of taking a train or bus,” he says.  “When a car parallel parks for you, or tells you when you’re too close to a truck, the driver is too far away from what he should be doing behind the wheel.” The passivity engendered by safety components, along with what Derick perceives as the next generation of kids expecting things to happen for them will, he fears, result in more accidents. Were it up to him, cell phones would stop working once a car is moving, the more so as laws regarding cell phone usage are not enforced.  In contrast to the United States, cars in Germany don’t have cup holders and that tells you something.

Asked what was the scariest thing that ever happened at Beeks, Derick remembered an employee who wasn’t paying attention while changing a fuel filter and  set the spilled gas on fire!  Fortunately the fire didn’t spread beyond the gas on the floor and was quickly extinguished. On another memorable occasion—scary at the time, but funny afterwards—a driver lost his brakes at the stop sign at the corner of Routes 299 and 44/55. He drove straight onto Beeks’ property and circled the building twice before the car ground to a halt.

There are many cars parked at Beeks for the long term. Derick works on them during his slow season, late winter, so he doesn’t have to lay off employees, and then sells them. He also has a passion for old cars and has been collecting since 1986. He owns six or seven, which he doesn’t typically sell. His 1969 Lotus is the most fun to drive; it’s zippy.  The prettiest is the 1965 Wolsley (from England) he restored for his wife. She chose the upholstery and paint color. Derick attends about five car shows a year and is vice president of a car club, and they both attend the Mini car shows in Canada and the US.  He and his wife both feel it’s a nice way to meet people and see the country.

Derick is eager to see Classics Under the Gunks—Gardiner’s car show that ran from 2007 until being discontinued in 2012—restored. In the car community it was a very well received event. There was an unusually large turnout for a nonprofit-sponsored show, 150 to 200 cars, and significant amounts of money were raised. He is pleased to hear that someone has stepped forward to continue it, and that it will be held again next year.

And did you know these facts?  Long-time Gardiner resident Bill Conner constructed the Beeks building when Route 299 was built in the mid-1950s. Before that he operated the garage in the now-broken down, weed covered structure at Benton Corners, diagonally across from Lombardi’s.