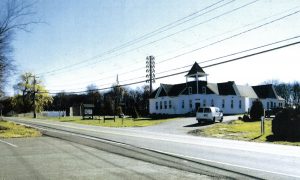 an artist’s rendering of the proposed tower.

Residents of Gardiner have long been almost unanimous in their desire for better cell service, with debate about the construction of a cell tower focused on its location. At a public hearing in December, 2011, the Town Board granted conditional approval to the company Wireless Edge to construct a 120-foot tall steel tower with six antenna arrays in a 100-foot by 60-foot fenced complex at the edge of Moran Field, the ball field next to the Town Hall. The tower will be twice the height of the surrounding trees and the base complex, housing six generators, will be roughly the size of the Town Hall.

The Town Board’s approval was conditioned on site plan approval and a revised response from the Federal Aviation Authority (FAA) regarding safety concerns and the Gardiner Airport.  The Planning Board later additionally requested, among other things, a revised site plan showing delineation of the wetlands. 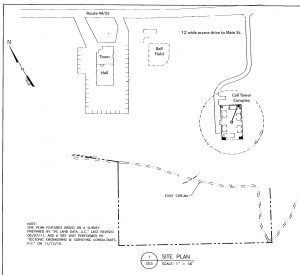 A detail of the site plan

The project faces an additional hurdle even if the FAA and wetlands issues are resolved; on January 27 an Article 78 law suit was filed against the project by a group of concerned residents from the surrounding area.

Individuals who wish to express their views about the proposed cell tower can send comments via regular mail, or by email addressed to the Town Clerk (townclerk@hvc.rr.com) who will direct comments to the appropriate Board.