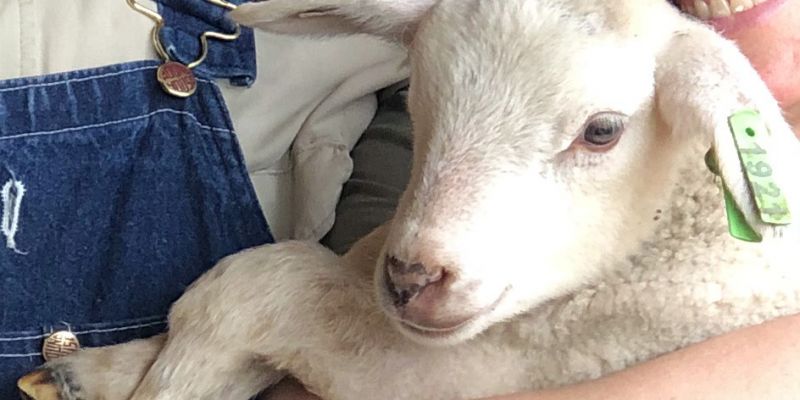 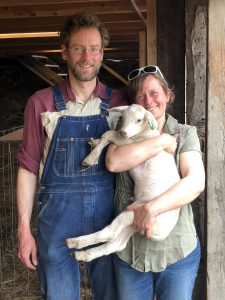 Until I spoke with Brent and Carrie Wasser, I had no idea there were different breeds of sheep for dairy, meat, and wool. But the newly-married couple, who recently established Willow Pond Sheep Farm on Route 44-55 in Gardiner, have embarked on an unusual enterprise: a sheep dairy, of which there are only a handful in all of New York State.

The Wassers explained that no one sheep breed is optimum for all three products. For milk, there is the East Friesian breed, which originated in northern Germany and is renowned for its ample milk production. There is also the French Lacaune breed, notable for producing the milk used to make Roquefort cheese. Brent and Carrie are currently raising East Friesians as they work on establishing their sheep dairy. This year they will obtain a Lacaune ram to introduce new genes to their East Friesian flock.

Sheep’s milk is especially high in fat, and very pleasant to drink on its own, as it tastes very much like cow’s milk but is creamier. It is especially suitable for making yogurt, ice cream, or gelato, which are products that the couple intend to begin making and selling within the next year or two. (Cheese is not on the horizon for now.)

Brent and Carrie, whose farm operation is located at Seven Meadows Farm, which is owned by Carrie’s parents, are also raising Dorsets bought from an organic farm in Vermont. The Dorset is an English breed that is especially suitable for meat. Carrie and Brent see meat as a complement to their eventual milk products, and since last year have been selling cuts of their 100% grass-fed lamb at the farm, as well as at Insook’s Korean market in Gardiner and the Rhinebeck and Hudson farmers’ markets. Organically-tanned sheepskins are also available.

Brent and Carrie are both in their early 40s and have fascinating and varied backgrounds that imbue their commitment to farming with intelligence, knowledge, and passion.

Brent is from Sacramento, CA, studied German at Swarthmore College, then went to live in Germany and Austria, where he learned the skill of cheese making, which he brought back with him when he went on to study at the Culinary Institute in Hyde Park. While there, he worked as the head cheesemaker at Sprout Creek Farm in Poughkeepsie.

Brent, ever restless to learn and experience more, soon realized that he really loved agriculture, particularly biodynamic agriculture, a holistic approach in which the  farm develops into a thriving community guided by the farmer’s perceptiveness of the contributions of everything on the land: soil, plants, animals, and people. Soon after meeting Carrie, in 2015, he went to Germany to study biodynamic farming, then returned to New York to work at the biodynamic Hawthorne Valley Farm in Columbia County.

Carrie grew up in New York City, but her parents, Greg and Janet Abels, bought Seven Meadows Farm in Gardiner when she was ten. It would prove to be a life-changing event for her. She studied at Oberlin College, and for ten years was a reporter at the Pittsburgh Post-Gazette and other newspapers. She moved to Vermont in 2004, where she became the editor of a new magazine, Vermont’s Local Banquet, and was its editor until 2017. To better understand the farmers that she was writing about, she worked on a variety of different farms and even raised some lambs on her own.

Carrie is now on the board of the Dairy Sheep Association of North America. She is also the founder and editor of the wonderfully informative website, Humaneitarian.org.

In 2018, Brent and Carrie moved to Gardiner and began Willow Pond Sheep Farm on the Abels property. They are both committed to raising their sheep humanely and responsibly, as well as to respectfully dealing with the environment. They hope to become both organically and biodynamically certified.

Another aspect of their farming is their desire to welcome people who would like to visit the sheep or find refuge from the stresses and strains of modern life. They aren’t quite ready to receive drop-in visitors yet (instead, call them in advance to arrange a visit) but they intend to have on-farm events and a farm stand before long.

Their newly-renovated and impressive pre-Civil War barn, where they had their wedding reception in May, is intended to be a gathering space for people in the future, and is one of the historic barn renovations that will be discussed in the next issue of The Gazette.

Willow Pond Sheep Farm is less than two years old, but Carrie and Brent Wasser have long-range plans and a great deal of energy. They look forward to making the farm a true asset for the community of Gardiner.

Contact the farm by calling 845-332-5583 or by visiting willowpondsheep.com. Lamb and sheepskins are available for purchase. Visits by appointment only.