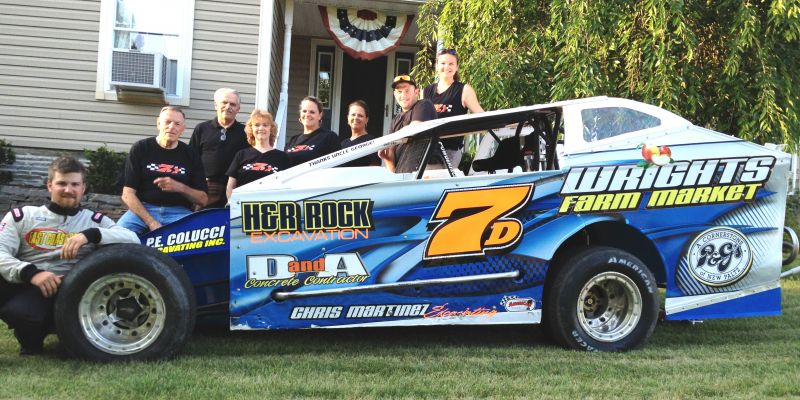 That’s not as “fully loaded” as most car buyers might like, but just right for a dirt track racing car.

Will is far from selling though.  He explains his interest, “My grandfather, ‘Poppy’ [Bud DePuy], raced in Middletown in the seventies. When I was fifteen, my friend Tom Johnson raced street stocks. I started in street stocks and then figured I’d move up to the Sportsman Class.”

Will races his car weekly at Accord Speedway, a quarter mile dirt track, and occasionally at the five-eighths of a mile Orange County Fair Speedway in Middletown. Although described as dirt tracks, these tracks are normally clay which provides better traction. The tracks are four to five cars wide with twenty to twenty-five cars in each race; races always go counterclockwise.

With such short tracks and so large a field, I wondered how drivers in the rear could move up in races of just twenty-five laps. Will said, “If you have a fast car—I’ve got a pretty fast car—you can pass. I started once twenty-first and came seventh. You want to slide to the turn but you want a controlled slide so you’re still moving forward at a good pace and you’re not breaking loose from the racing surface. But there are times when you spin out. The biggest thing is to try to keep your forward drive going.”

That’s all these cars are used for . . . to turn left. So each tire is a different size. The biggest is right rear; second, left rear; third, right front; down to the smallest, the left front. Will says they must be replaced frequently, depending on wear.

Each car is custom built (Will’s by TEO Pro Car); the frame built from hollow steel 2x4s on the bottom with the upper frame of tubular construction. Engines normally start with a Chevy 350 engine block which can be punched out up to 60/1,000ths of an inch over the original bore. The full containment seat “wraps” the occupant in eighth inch aluminum and padding. The driver is further protected by five point safety restraints, fireproof helmet and fire suit, plus gloves and racing shoes.

At the beginning of the season every car and driver’s apparel is checked. The motor is checked, particularly the linkages to insure the throttle won’t get stuck wide open. Still, there is an ambulance, a fire truck and tow trucks at each race.

Except at the track, Will is usually accompanied by his German short haired pointer, Shooter. When I asked him to sum up the attraction of the sport, he lit up, “I just love it. It’s just a fun hobby. Granted, it’s expensive. My grandfather did it; I like to do it. We—myself, Poppy, friend Ted Conklin who is a great support and helps us out—all just love racing. It gets us all together.”

Will feels the racing wouldn’t be complete without the help of the whole family. His uncle, Gary Upright, is always there to help and is part of the pit crew along with Will’s brother Sean. His aunt, Denise Upright, letters the car; his mom, Jennifer, makes the crew’s t-shirts; Mackenzie Boylan, Will’s fiancée, and Jordan Upright always make sure his gear is ready on race night; “Mimi” (grandmother Judy DePuy), keeps them all fed; and the sponsors keep them going.

It’s no wonder that written on the back of the car is ‘It’s a family affair.”