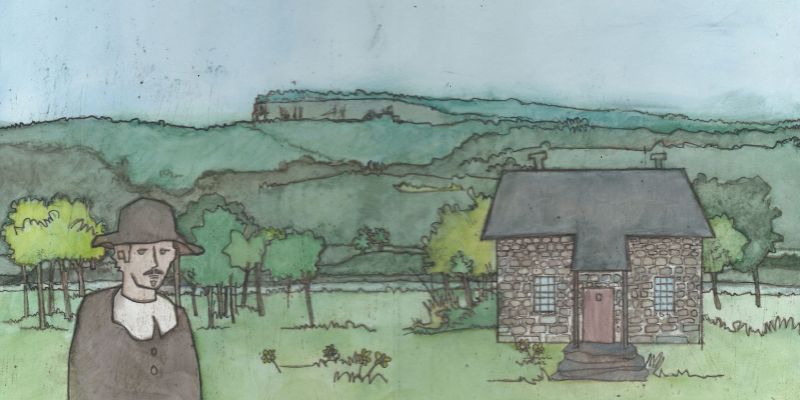 Hugo The Huguenot: A Local Author Tells The Tale

“Once more I need to flee!”

He climbed aboard his ship

and sailed out to the open sea.”

It was a coincidence that Jen Bruntil ended up working at the Huguenot Historical Society. It seems like the perfect place for a 12th generation descendant of Louis DuBois, the first Huguenot to settle in New Paltz, but Jen says she didn’t go looking for that job. 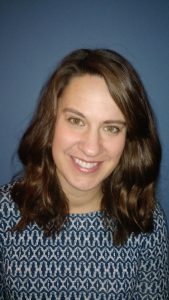 After her second daughter was born she decided to stay home for awhile with her children.  When she started thinking about going back to work part time, she told a friend what her perfect job would entail. A few weeks later that friend told her about a part time job at Historic Huguenot Street. “It was just one of those things the universe provided,”  she says. A few other fortuitous connections have led us to this lovely place; Jen’s new book, Hugo The Huguenot, is now available to all.

While it is technically a children’s book, Hugo The Huguenot is really something we should all read. For example, was anyone else unaware that “The Gilded Otter” was the ship that brought the Huguenots from Europe? Today, the descendants of those first Huguenots blanket the landscape of New Paltz and Gardiner, so knowing about them is essential to understanding where we live.

“I’ve always loved Huguenot Street. I got married on the Street,” Jen  says, but being a descendant of those first settlers did not become a preoccupation until she became school programming coordinator for Historic Huguenot Street, and started researching the Huguenot story and, in essence, her own family history. She has now traced her ancestors all the way back to the 1500s.

One of Jen’s roles is to give presentations to the children who visit Huguenot Street  and she was taken by their interest in the story of the settlers. 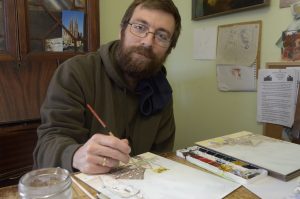 To make the story easier for younger children to grasp, she invented Hugo the Huguenot. Then, one night, she sat down with paper and pen and a prose poem began to evolve.  Suspecting that the poem had possibilities, she spoke to Gardiner Town Historian A.J. Schenkman, who is also a consulting historian to the Huguenot Historical Society. He suggested she contact artist Matt Kelly of Rosendale. Matt’s willingness to create illustrations made it clear that they had a book on their hands.  A kickstarter campaign provided the money to publish.

300 copies have been printed and will be available on line from the Huguenot Historical Society (http://historic-huguenot-street-museum-shop.myshopify.com) and hopefully from various local bookstores.