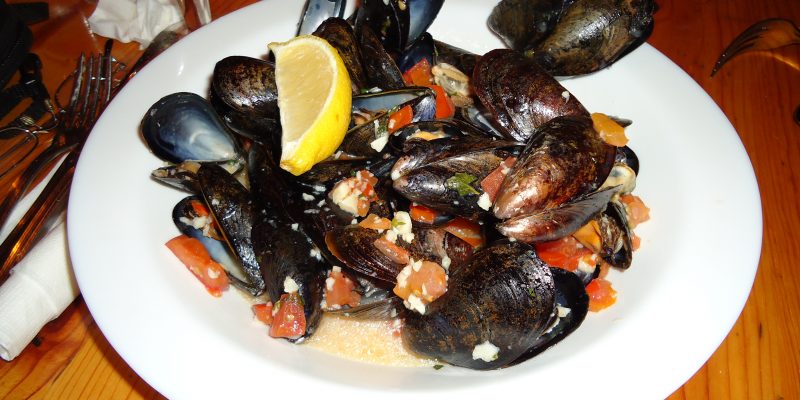 The omnivores in my household are so glad that Carmela Vitolo-Gelsomine and Michael Gelsomine decided to move on from their previous restaurants in Fire Island and bring their considerable skills to the Hudson Valley.  In particular, we were pleased to discover that Wednesday night is Mexican night at their Wallkill restaurant, Nu-Cavu, and we were near delirious to discover that on Mexican night one can indulge in a dish Michael originally developed for one of their Fire Island restaurants: Margarita Mussels.

This heaping plate of Prince Edward Island mussels gently simmered in lime juice, tequila, garlic, white wine and cilantro is finished with just a smattering of chopped fresh tomatoes.  When they’re harvested in the spring, the mussel meat  of PEI mussels is almost as big as the shell, but they are delicious even when they’re smaller, and the broth at the bottom of the bowl is so incredibly good I drink it.  (You can use a spoon, but it’s way more fun with a mussel shell and, no, I really don’t care who’s watching.)

I don’t ask much more on an average Wednesday night than  one of Nu-Cavu’s generous arugula salads (with blue cheese, walnuts, apples and a lemon vinaigrette) followed by these mussels.  It makes for an economical meal ($9.95 for the arugula salad/$10.95 for the mussels) and a healthy enough one that I can forgive myself a Palm (Belgian beer on tap) and the chips and salsa they bring while you’re waiting.

Nu-Cavu, located at the Walkill Airport, has a bar seating area, a charming formal dining room and, in warmer weather, an open patio where you can watch the small planes take off and land.  They also have a bar menu, the Mexican menu on Wednesdays and a full dinner menu, so there are plenty of choices.  Nu-Cavu will reopen after a holiday break on January 25th (which happens to be a Mexican Wednesday!)  They’re at 857 Plains Road, Wallkill.  845 895-9000. Open for Lunch (11:30am – 4pm) and Dinner (4pm – 10pm) Wednesday thru Sunday from.