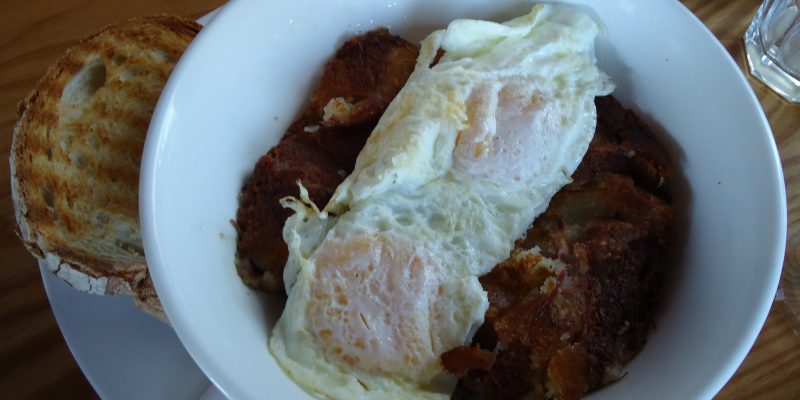 It’s been two years since Just A Bite visited Cafe Mio and sampled their fabulous French toast, so we went back for an update, and decided on a savory dish this time: possibly the best corned beef hash and eggs you will ever eat.

What’s different about it? Well, they start with really good corned brisket from a Jewish deli in Brooklyn, which they simmer for eight hours. Instead of shredding it into the usual paste that generally constitutes hash, they chop it coarsely, so there are still big chunks in evidence. The chopped corned beef is then mixed with onions and heirloom “carola” potatoes from RSK Farms in Prattsville. As a sidebar, Prattsville was one of those places that was nearly washed away by Hurricane Irene last summer, and though they lost six feet of topsoil (!) they have managed to keep producing their primary crop—heirloom potatoes—while they recover from the devastation.

What Cafe Mio does next with this terrific mix of raw materials is the most important part; they brown the heck out of it.  That means there are crunchy bits and soft bits beautifully combined.  The hash comes in a big bowl with two eggs on top, cooked to your liking (over easy for me; see photo at left …).

Break the eggs, watch the rich yellow yolks run down through your hash and dive in with the two slices of terrific bread that come alongside. The bread is from an artisanal bakery in Poughkeepsie, founded in 1880, and you can have white, whole wheat or gluten-free.