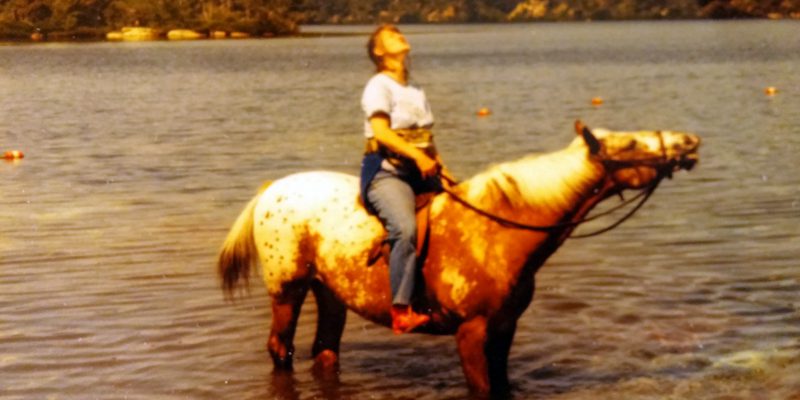 Reprinted from the Friends of the Shawangunks newsletter

This is a love story about how a girl brought her horse to the Ridge, and the horse gave the Ridge to that girl.

I was born in New York City and raised in Yonkers, but my mother and Aunt had enjoyed horseback riding in their own youth, and made riding lessons part of my childhood.

When Mom bought an abandoned 1882 farmhouse on the south facing slope of the Shawangunks in Gardiner, I fulfilled a long held dream and got a horse of my own. We built a small corral on the hillside behind the house, and in 1973 a red and white “blanket” Appaloosa colt joined our family. “Gorgeous Georgie O’Keefe” and I were partners for the next 26 years. He was an agile, confident, kind and sensible guy, that rare “bombproof” horse all riders want, but very few find, who never spooks or balks or bolts.

Being on horseback became a kind of meditation for me, with its gentling of intellect and focus on presence — the grasses, the mountain laurel, the hawks above, the scents and skitterings all around, and ourselves, surrounded and engaged, part of every thing. With Georgie, on the Ridge, I received the gift of being fully in the here and now, in a place as close to heaven as a woman could hope for.

On any given morning, we would head into the forest. I came to realize that the outbound terrain of daybreak and the homebound terrain of sunset do not resemble one another, although they are the same. No fear. If ever we got lost, Georgie found our way home. On one particular day, he discovered a secret, and I learned an important lesson: when someone you trust tries really hard to tell you something, pay attention.

Our favorite ride was to Lake Awosting. We’d head out from the corral, steeply uphill to an old lumber road, then follow a network of trails and deer paths, taking switchbacks north and east/west along increased elevations, crossing and re-crossing streams and eventually arriving at Spruce Glen. Ice remains on the ground there well into spring. There is a modest downward cliff on the left, leading to old-growth trees and a small wetland, and a craggy rock cliffside on the right. Georgie and I always enjoyed getting to Spruce Glen. The trail was wider and level, a great place to canter after all the climbing we’d done, and a long drink from the lake not far ahead awaiting us.

But this time, Georgie refused to go forward. He stopped. He tossed his head, chuffed, rattled the bit, flared his nostrils, and arched his neck so far that his head was nearly under my chin. He spun in a full circle, trying to turn back. I urged him forward and he obeyed, but with a sidestepping prance rightward and leftward, nostrils flared to the size of baseballs.
What the hell? A dead deer? Never bothered him before.

We got to Awosting, drank the cool water, had a sandwich (me) and carrots (him), rode the loop and headed for home. Spruce Glen, again, No other way, and we both knew it. Tired though he must have been, Georgie snorted, lowered his head and went into high gear, galloping through.

Decades later, bears are commonplace on the Ridge. Georgie died in my arms many years ago, but every time I pass the Spruce Glen crags, those ideal ursine dens, I recall that day, and that horse, and the blessedly transformed life he gave me in one of earth’s Last Great Places. And I am grateful beyond measure.