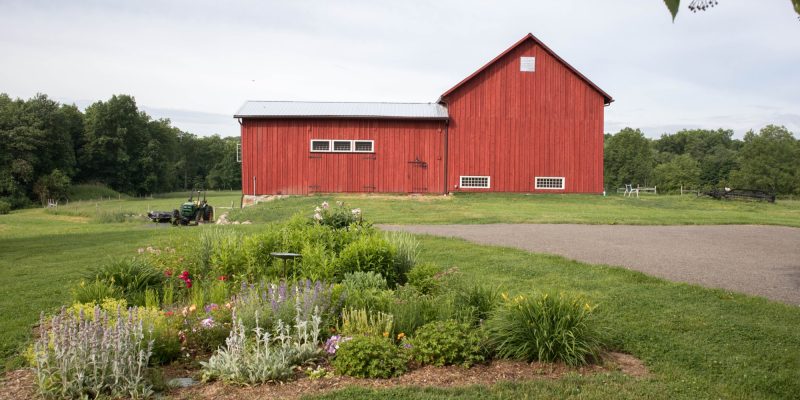 Last year, we featured barn rehabilitations in Gardiner that provided insight into how and why these Gardiner residents took on the enormous job of restoration. For some, there is something inherently romantic about a barn, especially one that has weathered the storms of life and still stands strong to tell of it. In this issue, we feature two final renovations that are worthy of note.

Greg and Janet Abels, the owners of Seven Meadows Farm, recounted how, over the years, they had “shored up” their circa 1850s barn, parts of which may be as old as the 1700s. The Abels said they came into ownership of the barn, located on Route 44/55, when they moved to the farm in 1983. The farm is now the home of Willow Pond Sheep Farm (Dairy Sheep Farming in Gardiner, Gardiner Gazette, Summer 2019).

It wasn’t until 2018 that they embarked on the major renovation that included re-siding, stone foundation work, and re-flooring of the barn.  Their biggest challenge, they said, was finding qualified help at a reasonable cost, but fortunately they found Martin Tomaczewski, a local builder and master craftsman, whom they hired to work on the framing, flooring, and structural elements. They also found a stone mason, Bill Davis of Earth & Stone Masonry, to carry out the foundation renovation.

It was important to them that the footprint and profile of the barn be maintained while retaining as many of the original chestnut and hickory beams as possible. Their advice for those considering such a project? “Be prepared to adapt and adjust as the renovation goes along. Assume there will be surprises!”

The Abels barn is among the few restored barns in Gardiner that are once again being actively used for animal husbandry; Greg and Janet recently leased their land to their daughter and son-in-law, who run Willow Pond Sheep Farm. If you’d like to see the barn, you can contact the sheep farm at (845) 332-5583 or www.willowpondsheep.com.

Inn at the Ridge Barn 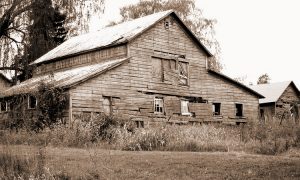 The Inn at the Ridge Barn Before Restoration

For Salvatore (Sal) Riccobono, co-owner of Inn at the Ridge Bed & Breakfast, the motivation to restore the barn located on the property wasn’t the romance, it was the challenge. Sal said, “Tackling such a big project was a challenge that I wanted to see if my son and I could pull off.”

The ancient barn has been in the Riccobono family since 2006, when they bought 2098 Bruynswick Road. The barn was used for hundreds of years to house dairy cows, and it has stood in its place since  1796, when it was built by the Decker family.

The farm and barn have a long-standing history in the area, pre-dating the 1853 founding of the Town of Gardiner. To give some historical perspective, the Declaration of Independence was signed a mere 20 years before this barn was built.

For a year or so, the Riccobono family did a costly and time-consuming renovation of the old farmhouse, which became the Inn at the Ridge. After that, they turned their attention to the barn, which was in really rough shape. It was “swiss cheese” Sal said, due to an infestation of powder post beetles and the beating of the northeast winds year after year.

This barn restoration is fascinating and impressive because most of the work was done by two people: Sal and his son, Justin Riccobono, working weekends and some nights. They scoured the area for antique barn wood and beams to replace what they could not salvage.

The barn was originally timber frame construction, a typical method of that era, using mortise and tenon joinery, secured with wooden pegs instead of nails.

Asked about the biggest challenge of the project, Sal recounted amazing stories of perseverance and ingenuity. For example, a 12” x 12” barn beam 30 feet long and over 800 pounds was installed by just Sal and Justin, with the help of a fork lift that could only lift the beam 12 to 13 feet. The rest of the way up, they used levers (pry bars and picks) so they could get it in place and sledge hammer it “square.” Phew! I’m tired just writing about it!

The Inn at the Ridge Barn Today

To finish the exterior, Sal found some 1800s ship-lap siding from an old barn that was being dismantled, and which had a similar patina to his barn’s wood.

Once in place and stained, you’d never know it was repaired. I personally love the Bruynswick Road-facing side of the barn (next page) with the antique sign lettering across the top wall, which says “THE PATCHWORK QUILT.” I commented on its lovely rusticity, and Sal said it will be left rustic until the right restoration craftsman can be identified to restore it without harming its authenticity and antique appearance.

Finally, I asked Sal what the biggest benefit of the project was, and he said, “Working with my son was such a pleasure because we worked without the conflict our Italian temperaments usually require.” I could almost imagine a wink at the end of that sentence. The farm at the Inn at the Ridge sells produce at the barn and offers a sliding scale to those in need. For more information: Inn at the Ridge, (845) 895-9251 or info@innattheridge.com.