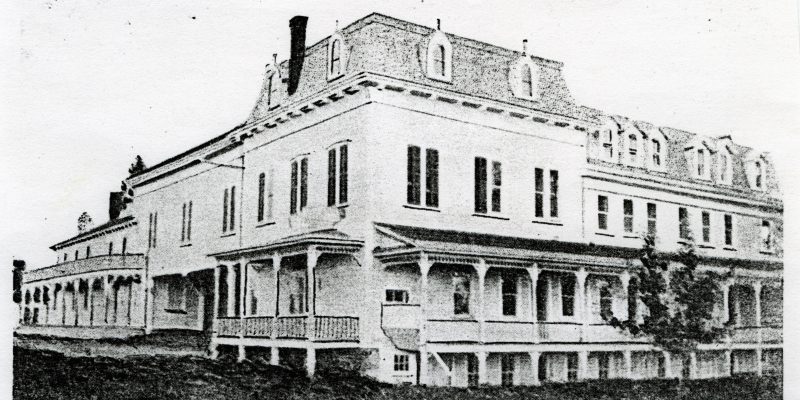 The tiny hamlet of Gardiner, summer, 1970… once the few shops on Main Street closed and the local baseball game wrapped for the night a country quiet and darkness enveloped the place.

Having grown up in the shadows of New York City, the peaceful town of Gardiner seemed like everything I had missed in a noisy life. A group of us—seven to be exact—freshly graduated from SUNY New Paltz, took up residence there, across the street from the dark and gothic Gardiner Hotel. The old and abandoned  building had already seen its day. The walls sagged every which way and the whole place seemed to droop towards the ground. There was only one thing left to happen to the Gardiner Hotel; soon it would be gone.

In the meantime, there it stood, commanding the view from our house, a dilapidated reminder of days gone by.

In 1869, the railroad came to Gardiner and the hotel was built alongside the station. Tom Callahan ran the place for years, and to many, it was Callahan’s Hotel. Local Republicans held their conventions there. School Supervisor Conventions were held at Callahan’s, too, and in 1910 there was a coroner’s inquest there, after Gilbert Sanborn died at the hands of fellow construction workers. By 1970, though, there was no real need for a hotel in Gardiner and the place had gone dark waiting for the end.

Then, one evening, I stood on the porch looking across the street and noticed that a light was on inside the empty hotel. Drawn by the glow, I crossed.  It was near the entrance that I first saw him—a smiling man with long hair, about 30 years old—standing outside smoking a cigarette. He waved me towards the door and introduced himself as David, the new caretaker of the Gardiner Hotel.

I was initially overwhelmed by the sheer size of the room we entered; it must have been the convention hall. David and his wife, Jan, had moved several couches and a large dining table with chairs together on one side of the huge great room, carving out a congenial gathering area in the midst of the moldy odors and the ghosts of another era. There, they had set up housekeeping with their infant son.

Over the following nights and days, guests began to arrive once again at The Gardiner Hotel. Artists, writers, college students, street people.  It was a decidedly bohemian scene that coalesced around David and Jan, and the music was always on—Tristan and Isolde, Tannhauser, Ride of the Valkyre—booming from the largest stereo sound system I had ever seen. David was a scholar of Wagner and the music was punctuated by his homilies on the composer’s life and work. He had been misunderstood, Herr Wagner, we were told, his reputation a casualty of German history. Love and transfiguration was his true legacy, not hate and war. Sometimes we would listen to Pink Floyd and The Grateful Dead, and David was lucid in describing the virtues of these musicians as well.

Well after midnight, James Joyce would appear; the books would be distributed and the readings would begin. David was a scholar of Joyce as well—Portrait of the Artist as a Young Man, Ulysses, Finnegan’s Wake; who knew what great treasures James Joyce had embedded in those books? David did.

It had become evident during our college years that the world in which we lived was not Disneyland. There was trouble everywhere. The Vietnam War was raging, thousands killed every week. The President of the United States was inviting young men to join in the slaughter. University campuses were erupting. Students had been killed. A Civil Rights movement was confronting the evils of apartheid in the streets of America, and people had been killed there too. Those hours in the great room with David and Jan were an oasis, and a profound, transforming shamanic journey in many ways. Night after night in that summer of 1970, I headed over to the Hotel. It was as if Greenwich Village had come to downtown Gardiner.

Then, the moment was gone. David and Jan packed up their car and left without really saying a word. Our little group began to break up as our destinies called. Any lingering consolations of adolescence came to an end for me when I received my letter from the President of the United States: I was being sent to war. I returned to Long Island to pack up my life. Months later, on a visit to say goodbye to my remaining housemates, I drove down Main Street and it was gone. The entire Gardiner Hotel had been carried away by demolition crews; not a stick remained. I  stood in the spot where the great room had been. And I said goodbye.

Editor’s Note: There is some indication that David and Jan (not their real names) might have been squatters and not official caretakers. They most recently lived in California, not far from the author, where David passed away recently and prompted this flood of memories. Historical notes in the article were taken from the Hudson Valley Historical Society website and various articles by AJ Schenkman.