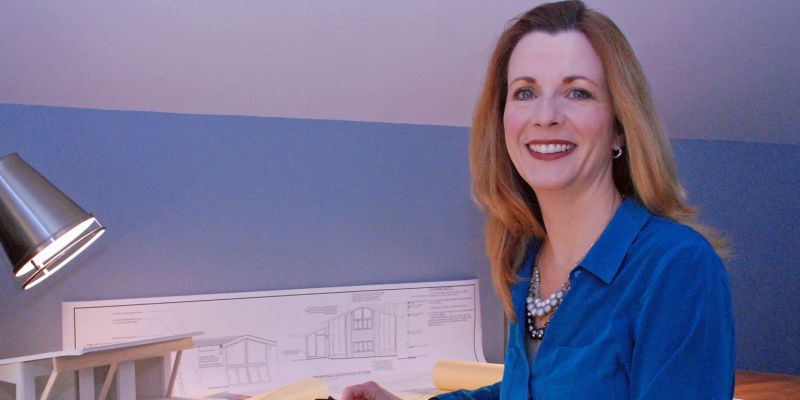 A Gardiner Architect Who Says “Yes”

In 2005, local architect Joe Trapani was volunteering his time and expertise on the renovation of the Town Hall and asked Kim Hoover, a fellow architect, to  join him. Kim said yes. Principal of Hoover Architecture, based in Gardiner, Kim had just come off the Hamlet Revitalization Committee where she worked on the proposed sidewalks and was then serving a two-year term on the Planning Board.

While working on the Town Hall renovation, Kim met Mike Gagliardi, Chairman of the Parks and Rec Committee and was reminded that they had attended high school together.  When Mike needed an architect to design an amphitheater for Majestic Park, he asked Kim who, once again, said yes and, when asked to research codes for construction of the Majestic Park pole barn, the answer was, well, you know.

In 1999, Kim and her husband, Ted, built their house in Gardiner.  Since then she has designed numerous homes and renovations here and farther afield. Currently, she has two houses going up in Gardiner and two major renovations nearby.  Kim also does commercial work for private owners and Health Quest, and has worked on the Dutchess County Courts buildings in Poughkeepsie, Renegades Stadium and the VA Hospital. “Every job I get is different, which is very nice.” Then she adds, “But the part I enjoy most is meeting people, both in volunteer work and for employment.”

Kim’s proudest volunteer accomplishment is the design of the Majestic Park amphitheater. She explained that the site offers seating on a natural slope and a location well suited for performances. “People who never go to the park because their kids are grown tell me that they would go to a performance at the amphitheater.” She envisions the Sammy Kaye Orchestra with our own Roger Thorpe, the West Point Jazz Knights, local theatre productions, perhaps in collaboration with SUNY New Paltz, movies and children’s programs at the amphitheater. Putting on her businesswoman’s hat, she points out that an infusion of people into the hamlet would be very beneficial to local businesses.

Resources for a project of this kind can come from private donations as well as donations of time and materials. Additionally, large developers who wish to build in Gardiner are required to donate either land for use as a public park, or money to the town, with the Planning Board making the decision as to whether it should be land or funds.  Much of the land acquired this way lies unknown and unused, whereas the funds, when requested by the Planning Board, go directly to Parks and Rec for the maintenance and development of Gardiner’s parks. The amphitheater project would be a worthy recipient of such funds. Without raising anyone’s taxes, funds instead of land would provide the town with a public performance space that all could enjoy …making at least one long-term Gardiner volunteer smile with satisfaction.

Hoover Architecture: 845-598-4762; design@hooverarchitecture.com.  or www.HooverArchitecture. com.  Kim is a member of the U.S. Green Building Council and the American Institute of Architects.