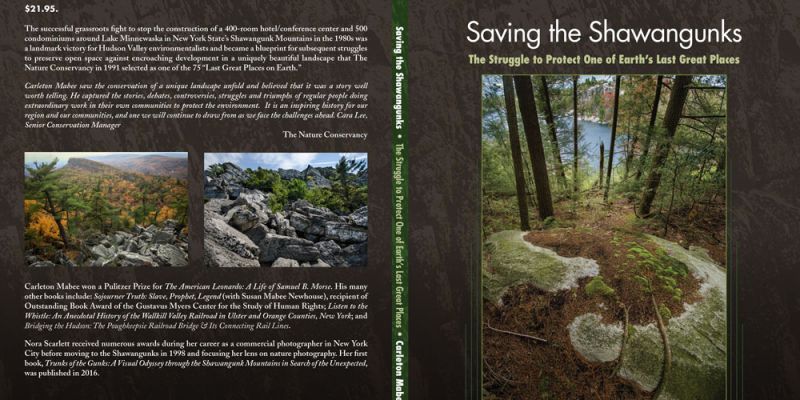 Saving the Shawangunks (Black Dome Press, with Photographs by Nora Scarlett, $21.95) written by Gardiner’s former Town Historian, Carleton Mabee, was released postumously in October of this year. Carleton died in December 2014, shortly before his 100th birthday.

The successful grassroots fight to stop the construction of a 400-room hotel and 500 condominiums at Lake Minnewaska in the 1980s was a landmark victory for Hudson Valley environmentalists. It became a blueprint for subsequent struggles to preserve open space against encroaching development in landscape that The Nature Conservancy, in 1991, selected as one of the “Last Great Places on Earth.” On the book jacket, Cara Lee, Senior Conservation Manager at The Nature Conservancy, comments, “Carleton Mabee saw the conservation of a unique landscape unfold and believed that it was a story well worth telling. He captured the stories, debates, controversies, struggles and triumphs of regular people doing extraordinary work in their own communities to protect the environment. It is an inspiring history for our region and our communities, and one we will continue to draw from as we face the challenges ahead.”

Carleton won a Pulitzer Prize for The American Leonardo: A Life of Samuel F.B. Morse, and wrote many other books. He was also a SUNY-New Paltz Professor Emeritus.  The book is now for sale at the Gardiner Library, and Inquiring Mind Bookstore, Barner’s Books, the Mohonk Preserve Gift Shop, Handmade and More, and Dedrick’s Pharmacy in New Paltz, as well as on amazon.com.