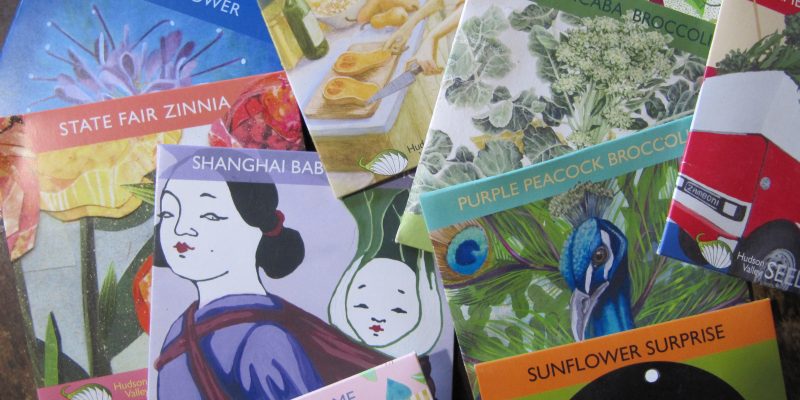 Hudson Valley Seed Library: From Humble Beginnings in Gardiner To The the Bronx Botanical Garden

If you have a garden and a library you have everything you need … This paraphrased saying by the Roman Philosopher Cicero has been Ken Greene’s mantra since he and  his partner, Doug Muller, started the Hudson Valley Seed Library (HVSL) about 10 years ago.  Ken was the much loved children’s librarian at the old Gardiner Library. He took the job as a part-time gig while he finished his Masters degree in education at SUNY New Paltz.  The degree finished, Ken became full-time at the library, putting together original children’s programs and summer programs for the next few years..

He talked more and more about gardening, and seed-saving in particular, even putting together  a summer program around gardening for kids.  He ripped up the postage stamp sized lawn in  front of the library and planted a garden. His smile always widened when one of the kids  came in munching on a purple podded pea, now a signature vegetable at the HVSL. Adults would complement him on the lovely flowers, but what were they?  The eyes would  widen when he told them the flowers were lettuce or spinach or radish going to seed. It was  always about the seeds.

Soon he played around with the idea of a seed library where seeds would be available to whoever wanted them, as long as they saved some and returned them to the library after harvest. It started modestly, using seeds Ken had saved from the tiny garden in front of the library. (Oh yeah, there was also the raised bed in the back yard, with more vegetables  going to seed.) About this time Sascha Dubrul showed up. He was interning at a local CSA but had experience with a seed exchange in the San Francisco area called BASIL, Bay Area Seed Interchange  Library, which had been formed by Sascha and a few others.  BASIL was probably the first seed library in the country, but not housed in a library. 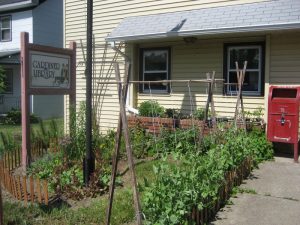 The Hudson Valley Seed  Library was the first seed library in a public library in the country.  There are now more than 300 seed libraries in more than 40 states. Sascha and Ken traded information and tips about running  a seed library for the Gardiner Library.

Another chance encounter, with Sarah Snow and her company, Treeo Design, set up what  ultimately became Ken’s Art Packs, the lovely and novel seed packages that have become  famous. Each year, Ken and Doug invite artists to submit examples of their work. 20 or so designs are chosen. Each artist is assigned a vegetable, a flower, or an herb selected for the next year’s seeds and the artist renders a design for the pack in any medium the chosen artist works in. There are always many more artists vying to do an Art Pack than are chosen. Each year the competition gets stiffer.

When all the art work is done and accepted for the year, the seed library has a grand opening for the next year’s packs. The first year the opening was at the new Gardiner Library; the 2015 art pack opening in November 2014 was held at the Bronx Botanical Garden. The Hudson Valley Seed Library has come of age.