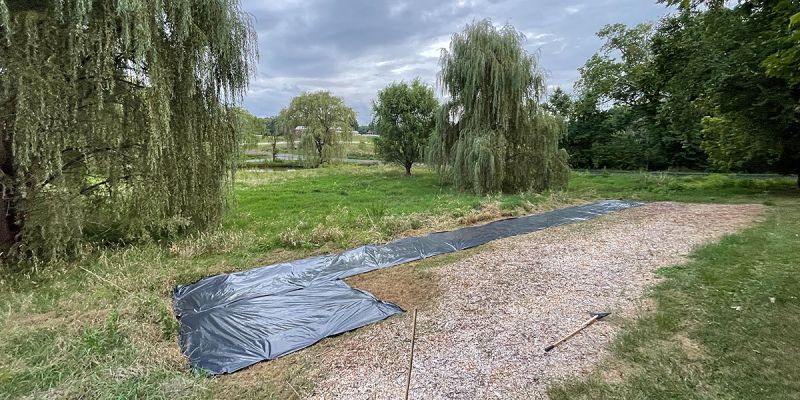 Last year the Gardiner Gazette (Winter 2021 issue) printed an article about the Wallkill Valley Land Trust’s new project called the Wallkill Valley Pollinator Pathway. For one Gardiner resident, this article couldn’t have come at a better time. Inspired by conversations with his then future mother-in-law, Chris Vultaggio had been wanting to convert much of his lawn into meadow for several years but didn’t know where to start. “Had it not been for the Gazette I would honestly not be at this stage,”  Chris explained.

After reading the Gazette’s article, Chris decided to reach out to Angela Sisson, an ecological landscape designer and chair of the pollinator pathway, who turned out to be the catalyst for his meadow project. The conversation quickly progressed from email to phone call to a site visit, and before long the intimidation began to fade. “Angela’s generous advice made the project seem approachable, despite the overall size of what I was looking to convert to a meadow.”

Like many, Chris would often stare out onto the massive expanse of his lawn and feel how useless it was. His land was a former farm that had been reduced to a monoculture green ornament. It did nothing for the local ecology except contribute to its destruction by way of carbon emissions from mowing. His curiosity led him to early conversations with a botanist friend who sparked Chris’ interest in land cultivation.

“How amazing would it be to look out and see a field of wildflowers, teeming with life and putting some good back into the world,” he exclaimed. The good he’s referring to isn’t just natural beautification. Sure the neighborhood would be getting a meadow exploding with color from black-eyed-Susans, milkweed, asters, boneset, goldenrod, lobelia, coneflowers, foxglove, and countless others – but all these are being intentionally seeded to support pollinator health.

In Chris’ case, this translates to 4000 square feet (his phase 1 planting) of buffet for hummingbirds, bees, and other vital parts of the pollinator pathway. And they’re all native – no exotic annuals here that will die come the first frost. Before long Angela supplied Chris with a wealth of resources, from articles on native plantings to the wonderful read Weedless Gardening by Lee Reich.

When summer came along, acting on Angela’s advice, Chris began his project with paper & wood chips to smother about 1000 square feet of lawn. He later expanded the area to about 4000 square feet. The preparation involved killing the lawn over the summer months, then in early winter, sowing meadow seed into the dead turf. On December 28th, after months of preparation, Chris seeded his new meadow. The seeds were the most expensive part of his project, which totaled about $300 for the 4000 square feet of conversion. That $300 will be saved in mowing expenses the first season. “I had to replace a few tools,” for which he opted for battery-powered rather than gas, “and buy the tarp and seeds, but the wood chips I sourced for free. The expense was far less than I had anticipated.”

Things have come full circle for this meadow project. We’ll check back with Chris next year to see how much he’s expanding the meadow and how his first growing season went.

“Working on my land has been immeasurably rewarding, and in doing so I learned many things – most of all patience,” Chris declared. “I’m eternally grateful to Angela for her guidance and expertise and look forward to the sweat equity paying off for the greater good of the natural world. Most of all I hope others are inspired and we can do more to further enrich Gardiner’s commitment to nature and the environment.”

Events at the Gardiner Library: