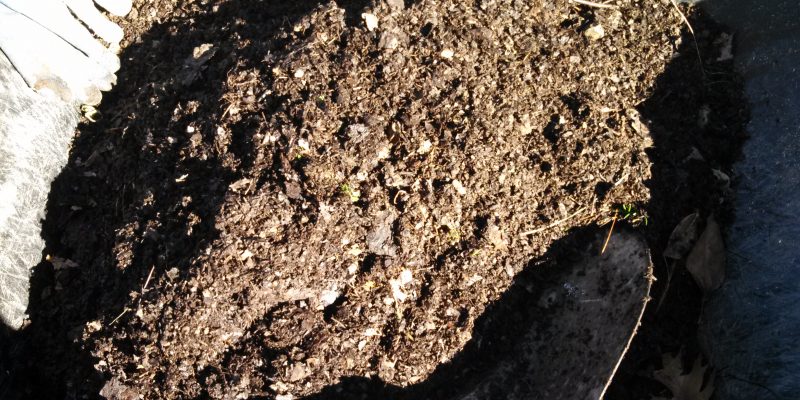 Anyone lucky enough to have more leaf mulch than they were able to use last season (Leaf Mulch: A Perfect Answer, Fall 2013) is in for a treat; the remains of mine have now broken down further and become a truly excellent substitute for peat moss. Peat, an accumulation of partially decayed vegetation that is unique to areas called peatlands, is both an environmental and a gardening miracle. Environmentally, peatland ecosystems are said to be the most efficient carbon sink on the planet. Peatland plants capture the CO2 that is naturally released from the peat, becoming natural “reservoirs” that accumulate and stores carbon-containing chemical compounds for an indefinite period. In terms of gardening, especially in Gardiner’s heavy clay soil, a bale of peat is perfect for lightening the soil and improving drainage.

The problem is that these two things are in competition with each other. There are peatlands in many countries, most of them thousands of years old, but our peat tends to come from Canada. While theoretically renewable, “the extraction rate in industrialized countries far exceeds its slow re-growth rate of 1mm per year.” 1 millimeter per year? That’s about 1/39th of an inch; even though peatlands cover about two to three percent of global land areas it’s possible that I’ve used more than that all by myself!

Peat is an important fuel source in many countries, but in our culture it’s the peat we use in our gardens that’s the issue, and it’s no small factor. In the U.K. it’s said that, “the use of peat by gardeners leads to 630,000 tons of carbon emissions each year,” and environmentalists and the government agree that the use of peat should be phased out and replaced by sustainable and, if possible, locally sourced alternatives, possibly as soon as 2020. Which brings us to that leaf mulch. My “year two” product was every bit the wonder product as peat moss and I’m told it provides more nutrition for the plants to boot.

Having learned all this, here’s what I think: I don’t want to keep gardening with some fern that died while the battle of Actium was being fought.  (FYI, Anthony and Cleopatra lost. Octavian won.) If you want to know more, visit www.peatsociety.org. Meanwhile, gather your leaves this fall, and start chopping.