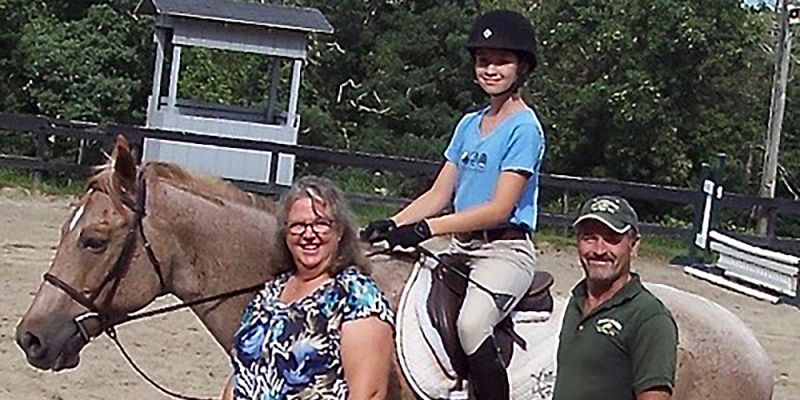 Lucky C Stables, an equestrian farm owned by Susan and Gary Clark, nestles on  21 acres in gently hilly terrain not far from the Jenkins-Leuken apple farm on Yankee Folly Road. The scene  is bucolic—thoroughbred horses graze in fenced paddocks, and the stables to the left and outdoor riding rings to the right of the entry drive frame a perfect view of Skytop Tower. There is an atmosphere of relaxed activity —horses being groomed and walked, and young people involved in their riding lessons.

Susan, who grew up in New Paltz, recounted Lucky C’s beginnings. She met and married Gary Clark, a cattle and grain farmer, in Missouri, where Susan had received her degree in Equestrian Science. Smaller Midwest farms were threatened by agribusiness at the time, so the couple decided to return to  New York to establish an equestrian farm here.

Gary initially found management work at Dressel Farms, while Susan gave equestrian lessons at their first location on Dusinberre Road. In 1991 they found their permanent home, which had only the indoor arena at that time. In the ensuing 28 years, they have added stables for 38 horses, two outdoor riding rings, a large addition to the indoor arena,  an office building, machine shop, and 18 fenced paddocks.

Gary and a small crew handle most of the building and maintenance jobs, and Gary also handles all the horse healthcare needs. Susan is in charge of the equestrian training and competition programs. She and four other women comprise the teaching staff, with equestrian students split pretty equally between adults and young people. Pupils may start as young as age three. Classes are year-round, seven days a week, on various levels: there is a six-week summer camp program, a community program with once a week classes for youngsters, and more intensive courses for those who wish to ride competitively. Students are taught the basics of riding, jumping, and showing horses in competition, as well as how to properly care for and groom their mounts.

Lucky C owns a number of “teaching” horses and ponies; and also boards horses for outside owners who come there to ride and train. “We have a lot of nationally-ranked kids and horses,“ said Susan, but added,  “Every program is individualized—and there’s no pressure for people to show—but a lot of people do.”

Susan is justifiably proud of Lucky C’s involvement with the New Paltz schools. They sponsor equestrian clubs at the middle and high schools, and have sponsored the SUNY New Paltz Equestrian Team for the past 17 years. They also sponsored the local 4H Equestrian Club for 30 years.

These clubs compete throughout the eastern US, with a fine record of achievement. Last year, the High School Club won the National Interscholastic Equestrian Association Championship, in a field of 790 teams, with a number of riders taking top rank in their classes. Ribbons festoon many of the horse stalls in the barn.

Susan emphasized that the staff tries to instill a spirit of teamwork and responsibility in their young riders, while helping them connect to the natural beauty around them. Later, I joined several parents and grandparents under a shady tree and watched Susan giving a jumping lesson, while another rider shampooed her mount in preparation for a show next day. The sense of peace was palpable.

Susan’s summed things up by saying, “We’ve been very fortunate. We’ve been able to raise our family, put our kids thru college, and do what we love. This is the real message I want to get out. This was our American Dream, and you can still do it. The world’s a crazy place, but if you have the passion and you’re willing to work hard you can make it happen. We feel like it’s been worth it. We give a lot to the community and they give back to us. It’s all good.”

Lucky C is truly one of our town’s treasures, fostering the values that most of us sought in moving here.