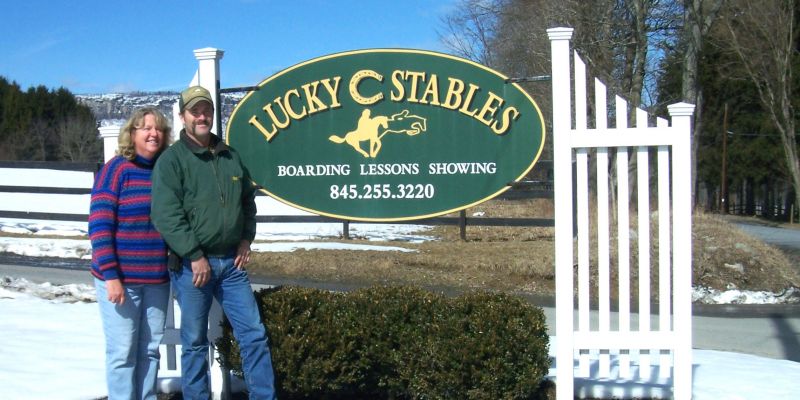 I arrived early for my appointment with Susan Clark at Lucky C Stables on Yankee Folly Road. It was a very cold day and I was happy to find myself in a small heated room with a big window that looked into the huge indoor horse arena. There was a woman on a horse gently cantering around the ring at a steady, controlled graceful pace.  Susan Clark appeared.  She spoke to the instructor, spoke to the student, and then came to see me.   As we sat on a couch in the viewing room Susan told me the story of Lucky C Stables.

Susan was born and raised in New Paltz.  After graduating high school Susan followed her strong love for horses and went to William Woods University in Columbia, Missouri in the Division of Equestrian Studies.  It was here in Missouri that Susan and Gary Clark met and fell in love.  Gary was the manager of a large grain and cattle farm in Missouri, but he agreed to come east with his bride.

It was the early 80’s, and family farms were going out of business here one after the other.  For a few years Gary managed a local apple farm. They opened Lucky C Stables in 1987 on Dusinberre Road.   A daughter, Lindsay, was born in 1988.  In 1990, the day before their son Wayne was born, Susan and Gary closed on the land on Yankee Folly Road.  There was no house there, but there were over 20 acres and a barn.  Susan and Gary, with a toddler and an infant, began to build the Lucky C as we know it today.   They put up fencing and developed a riding and horse care program that created community and family as well as horsemanship.

The accomplishments of Lucky C riders are many. The 25- member SUNY New Paltz Team rides at Lucky C.   In 2009 Lucky C Stables had the National Champion and Reserve in the Children’s Hunter Division for the M&S League, as well as the Intercollegiate Horse Show Association National Champion which was won by Lindsay Clark.   Just as an aside, Lucky C also produced a Nordic Skiing Champion.  Wayne Clark won a Nordic Skiing Scholarship at the University of Wisconsin.

Lucky C Stables is a full-care, full-service horse farm.  They provide lessons to the general public, from beginner to national level.  The facility has a large indoor arena as well as an outdoor arena.  They have fourteen lesson horses and four instructors, and boast a seven day a week lesson schedule for the client’s convenience.

As an addition to their lesson program, the farm offers seven weeks of summer camp for all levels.  The summer camp program is either a half day or full day, depending on the age of the child and availability. This program is a great way to expose new riders to horses.  Lucky C Stables also hosts four shows a year at their farm, as well as attending over 100 days of horse shows outside the farm.  Lucky C has 31 stalls available for boarding, and provides training if needed.

The farm emphasizes safety and knowledge.  Children of all ages learn about the wonders of the horse and, with assistance, can develop their riding career into whatever level they want to achieve.  As a matter of fact, I was so dazzled that I enrolled my 5 year old grandson.