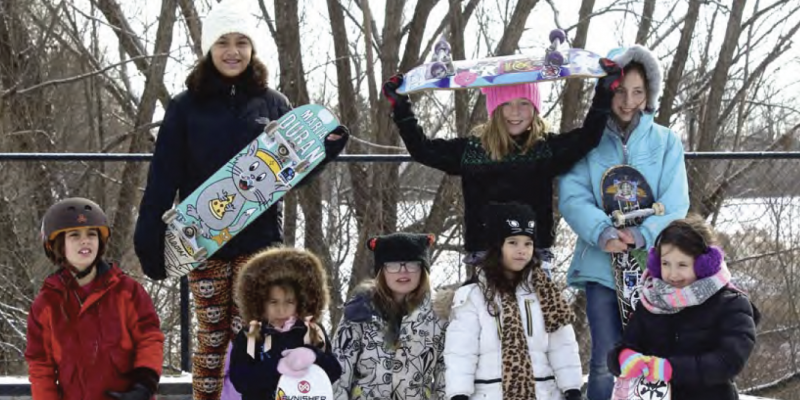 What began as a fun initiative to start a girl’s skate crew has become a bold statement of female empowerment. Started by Ruthless Ruthie Rainbow, with friends Sassy Sema and Piper the Punisher, Majestic Sk8 Crü rides in our very own George Majestic Memorial Park and has grown to nearly 30 young girls and a dedicated band of brothers and young boys.

The crew is also one of the newest additions to the Girls Riders Organization or ‘GRO’ Hudson Valley. GRO is a national not-for-profit organization founded on the premise of strengthening community involvement in “action sports” for girls, particularly skateboarding. In fact, the organization hails a powerful mission statement, explaining that the group is founded on the principle: “…to inspire, educate and support girls (of all ages) to be confident leaders of positive change.” GRO tells girls that, “they are welcome, they are important, they are capable, and they matter.”

The idea for the skateboarding group blossomed for Ruthie nearly four years ago, after her time in Gardiner’s Summer Recreation Program. Ruthie’s mom, Georgia Weinmann, was at first reluctant, and purchased a scooter instead. But after several weeks of her daughter insisting on learning the sport, Georgia bought Ruthie her first skateboarding equipment.

Ruthie loved the sport, but learning to skate beside older, experienced kids was intimidating. When asked why Ruthie wanted to start the crew, her response was simple; “I just wanted someone to skate with.” So Ruthie pulled together a band of girls that would eventually form the Majestic Sk8 Crü.

Ruthie’s love for the sport is contagious and she’s encouraged many kids with no interest in skateboarding to join. From spunky 3-year-old riders to ambitious 12-year- old skateboarders, not much can stand in between this crew and their skateboards.

Many of the parents note that the confidence and mutual support displayed by the skateboarders each session is ever-growing, as are their media pages. The crew’s Facebook group has over 100 members and their Instagram is nearing 250 followers. The crew’s welcoming motto, “You can shred with us,” has become their vision and signature hashtag.

Unfortunately, the record cold temperatures and frequent snowfalls this winter have made skateboarding meet ups few and far between, but the Gardiner skate team merges with the Hudson Valley Crew once a month to practice at an indoor skateboarding rink in Peekskill.

While the group’s popularity continues to grow, the funds required are substantial. This year, the group hopes to raise enough money to have extra safety equipment and skateboards on-hand; something useful for aspiring riders unsure of the sport. They are also looking to eventually put funds towards refurbishing Gardiner’s skate park. Some of the girls dream of becoming competitors someday, possibly in the Olympics. The 2020 Olympics will be the first to feature skateboarding as a permitted sport and Ruthless Ruthie has her eye set on the Olympics of 2028.

With everything the crew has accomplished so far, anything they want to achieve seems well within reach, and you can help. Majestic Sk8 Crü is looking for spare helmets, kneepads, elbow pads, wrist guards, and spare boards (hand-me-downs accepted!), and cash donations made are tax-deductible, as GRO, is a 501C3.