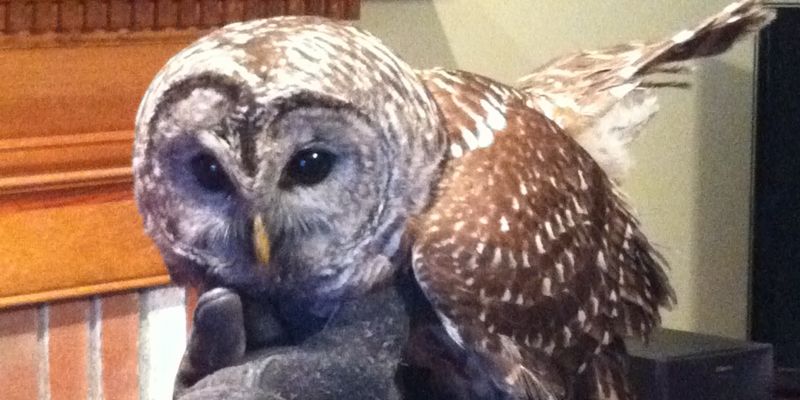 Out Of The Flue: An Owl Story

It was with new-found interest that I read the “Neighborhood Alarm Clock,” about local owls, in the winter edition of The Gazette. But my new fascination with the owls of Gardiner had its roots not in the pages of any written source. It originated from my living room fireplace. Sometime in late January, I found myself hearing an alien sound in or around my house. Efforts to isolate the sound proved futile; it would invariably cease before I could localize it and investigate its origin. Until the first Sunday in February, that is, when a gentle “whooa” presented itself long enough to announce the presence of a visitor somewhere in my chimney. I was still unable to identify the noisemaker. It was not voicing the familiar “who cooks for you, who cooks for yoooouuu-all”  owl call familiar to many Gardinerites, and was not even necessarily a bird-like sound.

A call to a very helpful and friendly local chimney service brought the first clue to the identity of our visitor. “You’ve got a large bird, sitting above the firebox on top of the flue damper. Better call the DEC.” When I visited, the New Paltz DEC theorized that it might be an owl but was not equipped to address its removal from the base of a fireplace chimney.

Enter the amazing Annie Mardiney, animal rescuer and state and federally licensed wildlife rehabilitator extraordinaire from Rosendale. A friend had found an injured owl last summer, and he gave me Annie’s name and number. She had nursed last summer’s owl back to health and released him back into the wild in an event attended by about ten people (including me).

On the phone, Annie was more than intrigued by my fireplace story, and three hours later she was looking up our flue. We had our very own barred owl, she told us, as she reached up with gloved hands to deliver to us the most majestic and gorgeous creature I could remember feasting eyes upon. And in our living room.

Even Annie was surprised. Owls falling down chimneys appear to be quite the rarity. An examination revealed that he had limited vision—possibly from spending such a prolonged period in the dark—and a bit of tail feather damage. He was also quite hungry. For the three weeks that followed, the owl spent time in one of Annie’s outdoor flying cages. Although it took him a while to reorient himself to the light and to the larger world, he soon re-discovered the joys of eating mice, gorging himself back to his full weight and, as Annie said, “perching, flying, giving me the big angry owl look.”

The last week of February saw his emancipation and return to the pine trees of Ulster County and I started to make calls about installing a chimney cap.

Annie Mardiney is entirely self-funded and donations allow her to continue her good work. If you want to contribute, or have a wildlife dilemma, try her at 845-943-8098 or 175 Mountain Road, Rosendale 12472.