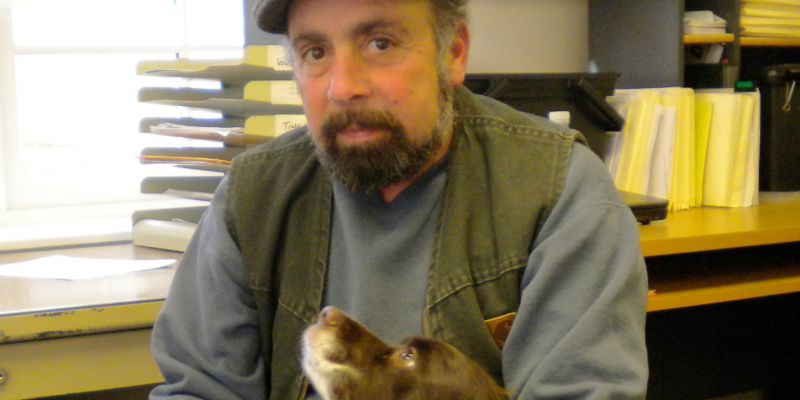 Vinny Brognano has been Gardiner’s dog control officer for ten years, and his Springer Spaniel Paddy has been with him for nine of them.  He was building inspector with Don Otis for two and a half years and also ran the transfer station.  He still sometimes fills in for Merry McCall, the transfer station attendant.

Vinny has a passion for dogs and gives them his all.  His job is to enforce Article 7 of the NY State Department of Agriculture & Markets.  It covers the licensing, identification and control of dogs and the animal population in general. By the time Vinny gets involved he knows the animals are in some kind of tough situation, so he treats them all with kindness and sympathy. The job primarily involves picking up strays and investigating dog complaints about both the things dogs do to people (barking, running at large) and the things people do to dogs (being left out in the cold). Usually issues can be settled between neighbors. Less easy to deal with are those who hoard animals.  Gardiner has had a few notorious ones, but fortunately not many.  By law, no one is allowed more than four dogs without applying for a kennel license.

Vinny picks up about two strays per month.  If the dog has identification it usually does not stay longer than overnight. Dogs with no identification are taken to the kennel at the Transfer Station.  By law they have to be kept for five days before becoming adoption prospects.  Vinny visits them three times a day.  The kennel is heated, and a groomer  donates time to bathe and trim dogs as needed.  Prospective adoptees are advertised in the local newspapers and sent to Cornwall vet Laurie Stein, who does the necessary clinical work, which is cost effective for a dog control budget.  If they’re not claimed, dogs deemed un-adoptable are turned over to a rescue organization.

A common situation is that of the good Samaritan who notices a loose dog by the road and stops to “rescue” it but, unless the dog is in danger, chances are that you will transport the animal much farther from home than he actually is.  Better to alert a neighbor, or chase the dog towards the nearest house (very likely his) or, if necessary, call Vinny (cell phone 914-388-2892) or the state police (691-2922).  Most true strays are frightened, and with Vinny’s professional, calm attitude, will jump into his car.  He lures more difficult dogs into a Hav-a-heart trap.  It can take time and patience, but nine out of ten dogs are won over by food.

Clinics for dogs (and cats) are scheduled in Gardiner in May and October.  Animals receive an exam and all shots including rabies, and a heartworm test, all for a low rate―thanks to Laurie Stein.  Additional clinics are offered by Laurie at the Plattekill Town Garage every third week in warmer months.

Right now, our Gardiner kennel is in need of renovation.  Although inspected annually by the Dept. of Agriculture, the walls show signs of crumbling and the roof leaks.  Vinny hopes to have a fund raiser―possibly a car show―to raise the needed donations.

Finally, have you licensed your dog with the Town Clerk?  It’s not only the law, but also ensures the safety of your canine friend should there be an emergency.