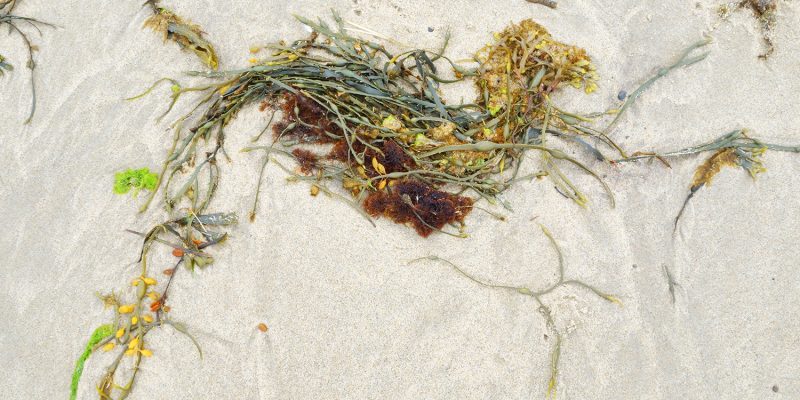 Several years ago, Linda and Michael Gold were walking along a beach in Prout’s Neck, Maine, a favorite spot, when Linda noticed some unusual clumps of seaweed. She called Michael to look; it looked like a heart and the scene warmed them both, especially since it was Linda’s birthday.  Soon they started looking for other unusual seaweed and found lots of ”specimens” of dinosaurs and birds. From that moment, Michael realized he had discovered a whole “new species.”

Michael named them Seaweedosaurs. He spent the rest of the day taking photographs all over the beach, building a huge collection of images of the “prehistoric animals” in the sand.  It was the discovery of a lifetime, and the result will be a show this summer at the Gardiner Library. 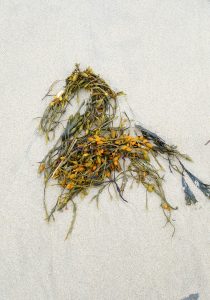 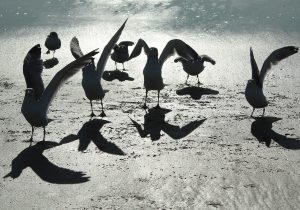 Over the past eight years, he has held about a dozen intriguing one-man shows all over the Hudson Valley. They have included “Eccentricities of Tuscany, Provence, and the Cost Brava,”  “Keepers,” and various exhibits of Street Photography.

As a professional photographer, Michael Gold has always put a great deal of thought and preparation into his shows, wanting to provide social commentary, satire, or humor along with first rate photographs.  Choosing the pictures, designing the mats, and selecting the framing give him a chance to create wonderful shows and promote the education and enjoyment of photographs by the general public. In this show, he has not made any changes to the “prehistoric animals” he discovered on the beach in Maine; nothing was rearranged to make a special shape or figure.

The reason for mounting this show at the Gardiner Library includes his excitement about these special photographs which, for the first time, illustrate a “new species undiscovered by Charles Darwin,”  and his admiration for the community room at the library.  This is his second exhibition there.

According to Michael, this particular show is totally different than any of his previous ones.  When he first discovered the “animals” and “birds,” he took over 500 pictures. “No one has ever seen anything like it before; it was one of the most exciting moments of my life!”

Now he is excited to share the images. He is also excited that school children will attend and have the pleasure of seeing Seaweedosaurs and Seagulls.  He hopes the show encourages children to notice shapes, shading, and forms while also encouraging them to do something creative for themselves – in short, he wants to inspire them to see things in ways new to them.

He will even host a contest encouraging children, as one group, and adults, in another group, to name some of the images in the pictures. The best name choice from each group will win an 8 x 10 signed print as a prize from the photographer. Michael Gold’s photography show Seaweedosaurs and Seagulls will be on display at the Gardiner Library from July 10 to August 28 with an opening reception, which is open to everyone, on Sunday, July 10 at 2 pm.  You can find out more information at www.gardinerlibrary.org.