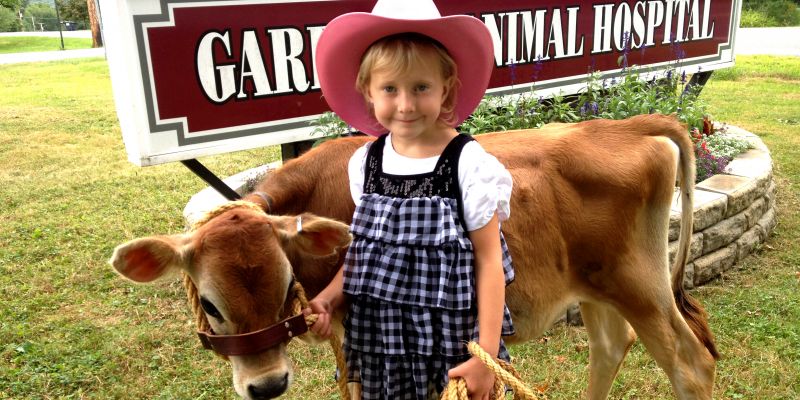 Slowing Down The Traffic In Gardiner

Just before the Ulster County Fair this past summer, Gardiner was a hectic place, with new sidewalks slowing, stopping and actually closing Route 44/55 at times, then one lane traffic over the Wallkill as the bridge was getting a much needed coat of paint (a delightful barn red). But what really had people slowing down was a Jersey calf named Zoe who had a temporary home on the front lawn of the Gardiner Animal Hospital.

Zoe was one of three Jersey calves born four months earlier, in April, on Domino’s Dairy Farm in  Accord. Jersey calves are bottle fed, as their mothers’ milk is used at the  Dairy to be sold.  (The calves do get to drink any milk that is left over in the Dairy.) Madison Goodnow, age five, took over feeding and caring for the calf. Her father, Matthew Goodnow, also started caring for calves at five years of age and was a good teacher for Maddie, who was taking Zoe to the Ulster County Fair. 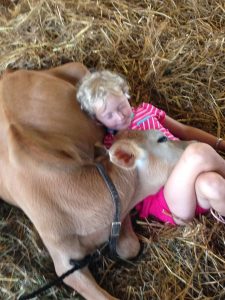 Maddie and Zoe taking a nap in
between events at the fair last summer.
Picture courtesy Goodnow family.

Zoe and Maddie were entered in the Pee Wee Showmanship and Cloverbud Class where they won a rainbow colored ribbon and a blue ribbon. Maddie was very busy at the Fair. When Zoe is home she has a bath once a week, but at the Fair a bath every day is required and the clean up around Zoe is constant. Along with these fun tasks, Maddie walked around the show ring with Zoe where she won the two ribbons and, when not working, handed ribbons to the judges for presentation. In the future, Maddie and Zoe will be back at the Fair and, after Zoe is bred, Maddie will be at the Fair with Zoe and her calf. Maddie said, “Zoe was too little to be with the bigger cows this year but next year we’ll get to stay the night.”