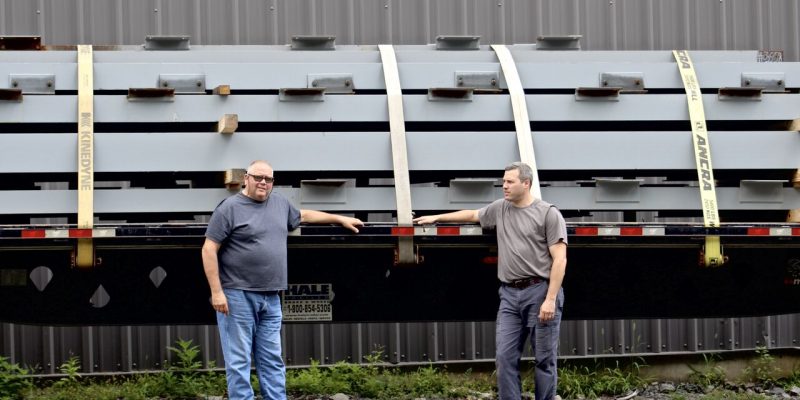 What’s Going On In There? Fall Fittings: Roots 70 Years Deep

Midway between New Paltz and Gardiner, on Route 208, motorists may be charmed by an orange-painted metal stick-man cavorting roadside. Next to him a modest sign announces “Fall Fittings: STEEL, Welding, Fabrication, Erection.” In a sprawling lot, loom industrial warehouses and heavy equipment—an anomalous sight in this bucolic landscape. What exactly IS going on in there? I met with Robert Zaccheo to find out. Robbie, intensely knowledgeable and engaging, loves what he is doing and is most eager to share his enthusiasm about his family business, with roots 70 years deep in our community.

Robbie, who co-owns the business with his cousin, Chris Zaccheo. uncle, Jim Fall, and mother,  Ann Zaccheo Phillips, has 20 employees—sturdy souls, enduring summer’s heat and winter’s cold in the huge unheatable, un-air-conditioned spaces. Robbie laughed when I asked about their business name. “We get a lot of calls, like, ‘Hey what do you guys do?’ They think we’re a dress shop!” As older residents know, Fall Fittings is a welding and metal fabrication business begun in 1949 by Robbie’s grandfather, Dick Fall, with the original goal of manufacturing pipe fittings; hence the name Fall Fittings.

Early on, the shop began taking on a few more challenging jobs. In the fifties and sixties, Mohonk Mountain House commissioned Fall Fittings to produce the distinctive green railings for their balconies. Rocking Horse Ranch also provided a good deal of work, particularly on their show-horse trailers. In the 1970s, the shop began to do more structural steelwork, providing the steel framing for local strip malls in NJ and NY, and for local businesses such as Chez Joey and later, the Gilded Otter in New Paltz.

Dick Fall retired in the 1980s and Robbie’s dad, Robert Zaccheo Sr., took over, expanding the business with a number of ambitious jobs, including manufacturing toll booths for the NJ Turnpike and NY Thruway. When the economy tanked at the end of the nineties, the business turned back to more local work—Mohonk again; structural elements for the ”lace factory”/artist’s studios renovation in Kingston—and others. Fall Fittings also became a source for metal for other contractors, and even for local artists and students of the metalworking courses at SUNY New Paltz.

Robbie arrived at Fall Fittings in a circuitous way. He earned a B.S. in civil engineering in 1996, later earned a law degree, worked locally as an attorney for a number of years, and eventually began to reassess his career choice. He continued to work part time as an attorney but returned to Fall Fittings just as his father was retiring from the business; a third-generation incarnation of Fall Fittings got underway.

Robbie commented that, “Around that time we made the jump to a computerized system. For 50 years before, it was all manual torching, welding, drilling and punching. You really saw the computing power increase in the 2000s. Engineering got more elaborate; without the computing power, very complicated structures weren’t designed, because you have to do so many complicated calculations to figure out a custom beam or situation.”

An investment in two massive and expensive new pieces of computerized equipment—a high-definition plasma plate cutter that can cut, drill, mill, tap and countersink steel plate up to two inches thick and up to  eight feet wide and 20 feet long, and an angle-cutter—allowed the business to take on a number of exacting jobs. The plasma cutter recently produced base plates to be used in the construction of the fantastic new tower going up over the Museum of Modern Art (MoMA) in New York City.

Fall Fittings is currently constructing new headquarters for the Peekskill Fire Department,  among other projects, but is always available to local businesses. Robbie recently produced a beautiful sculptural sign for a new business in New Paltz. ”I probably put more time and effort into that thing than I ever made any money on, but [they] were so thrilled”. Robbie gets the most satisfaction from getting involved with his clients, big or small, and seeing them happy in the end.

Like his grandfather before him, Robbie Zaccheo is here to serve his community with his time and multiple talents, and Fall Fittings seems to be here to stay.