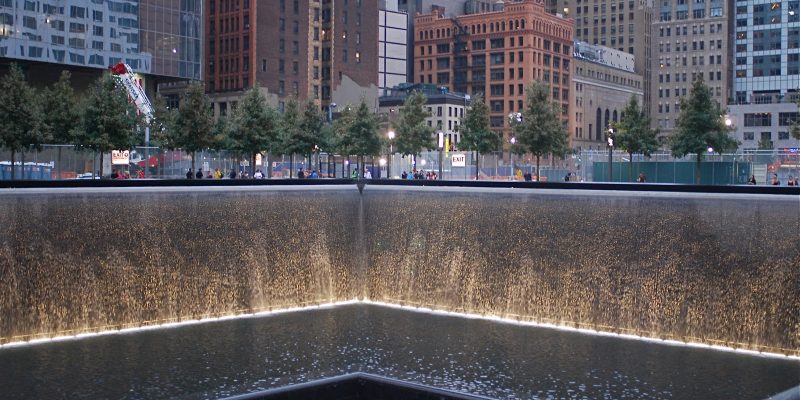 Talk about a David and Goliath story. Two men, Kurt Wulfmeyer and Chris Powers, who own a small art manufacturing company, competed against the best and the brightest to win the contract to build the 9/11 memorial for the World Trade Center site in New York City.  They won. The key to their success was coming up with novel design and engineering ideas that helped to radically reduce costs while reducing the potential for human error in the construction process. And the hub of activity is here, now, on Steve’s Lane, in Gardiner.

The memorial, titled “Reflecting Absence,” will be installed at the site of the twin towers that were destroyed in 2001. The memorial plaza at street level will be filled with a forest of trees. Two recessed pools in the exact footprint of the former buildings will drop 30 feet below street level and the perimeter of the pools will be lined with steel parapets.  The parapets will be inscribed with the names of the victims and their interior walls will be a cascade of the largest man-made waterfalls in the United States.

The memorial was originally designed by the Israeli-American architect Michael Arad, but it is Kurt and Chris who’ve been working out the details of how to make it actually happen. One of the more ingenious ideas they’ve come up with was to bevel and bend the steel plates for the parapets instead of welding the joints by hand. With 128 parapets in total, and four corners per pool, welding would have been labor intensive, with more room for error and less durability over the long term. Another challenge the duo faced was devising a cooling system for the steel structure. It will be a tactile surface that people will want to touch and lean on, but it will also have the potential to get scorching hot; metal, water and electricity don’t tend to mix, but they’ve found a way.

Before working in Gardiner, Kurt and Chris were the co-directors of Tallix Fine Arts Foundry in Beacon. In 2006, they left Beacon and formed KC Fabrications. They soon found themselves working on deadline, on several large jobs in Kurt’s property on South Mountain Road. An awkward fit for a home occupation, the business moved to a space in Gardiner’s industrial zone, and now they do custom manufacturing of art and architectural fabrications and restorations. They work with bronze, stainless and carbon steel, aluminum, and various resins.  Their client list includes a Who’s Who in the field of public art and architecture: Louise Bourgeois, Alexander Calder, Jeff Koons, Zaha Hadid.

It’s been a busy year. At the request of the National September 11 Memorial Com-mittee and New York’s Mayor Michael Bloomberg, Kurt and Chris read the names at this year’s name-reading ceremony. While it is always difficult to predict when mammoth projects like this will be finished, they’re working non-stop, and it is anticipated that the final installation will begin in January of 2011. In the mean-time, the media, including the Gazette, have been knocking on their doors.