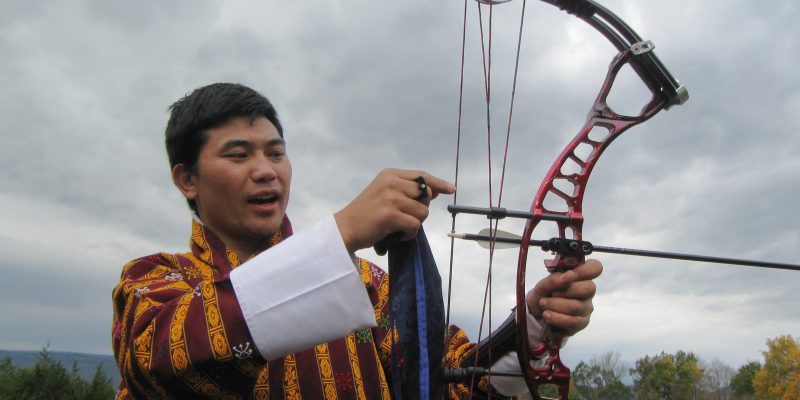 Gardiner is a surprising town; one never knows what might lie around the next corner.  Well, road.  This handsome young man is Tshering Dorji,  member of the five-man team that won a Bhutanese archery tournament here recently.   Tucked away on an isolated field off Sand Hill Road, eight teams competed with one another over a two-day period in honor of the marriage of the King of Bhutan.

The land is owned by Colm Lanigan, a Manhattan based Canadian who plans to build a home here eventually with his Bhutanese wife, Sonam, and son and daughter.  On most Sundays and some Tuesdays, Colm is host to a group of Bhutanese young men who are here temporarily  from their small Himalayan kingdom, population 700,000, sandwiched between China and India. These men take weekends from a heavy work schedule in New York City to indulge in the national sport of Bhutan archery.   Some come even in winter, although they admitted that it’s hard to find the arrows in deep snow.

This is not archery as we know it!  The shooting distance is 150 yards.  One does not see or hear the arrow until it hits—or doesn’t hit—the faraway target.  The archer begins by lifting his bow high; it was explained to us that this action lifts the 50 to 70 pound draw weight away from the arms and onto the shoulders.  Then the archer lowers the bow and aims.  This is very friendly competition and it is normal for the other teams to yell and shout jeers in order to distract their opponents!  The bamboo bows of yore have been replaced by Hoyt compound target bows, but aim must still be very accurate as members of other teams are standing not that far away from the target!

We arrived on day one and, as the only non-Bhutanese there, all heads turned.  The organizer of the event immediately welcomed us, and then we fell into conversation with Tshering Sambo (Tshering is a common name in Bhutan- means “long life”).   He was wearing  a beautiful “gho,” (pictured above) all handwoven, which he said took about three months to make.  Day one was the semi-finals, at which two teams would be eliminated.  Unfortunately one of those teams was his, but he was team captain and high scorer so did not seem concerned.   What was really interesting is that when we returned on day two we discovered that, for luck, Tshering had loaned his gorgeous gho to Tshering Dorji, his best friend from seventh grade onwards.  Tshering Dorji later emailed us that we had brought him luck, but obviously it was all due to this incredible gho.

We were invited to share lunch, which was extremely spicy but topped off by Raffaela’s pies from Tantillos.  Then there was a lot of dancing in which the women showed off their “kiras”;   traditional attire is required in Bhutan except in the privacy of one’s home.  We were honored to attend this event and humbled by the hospitality.