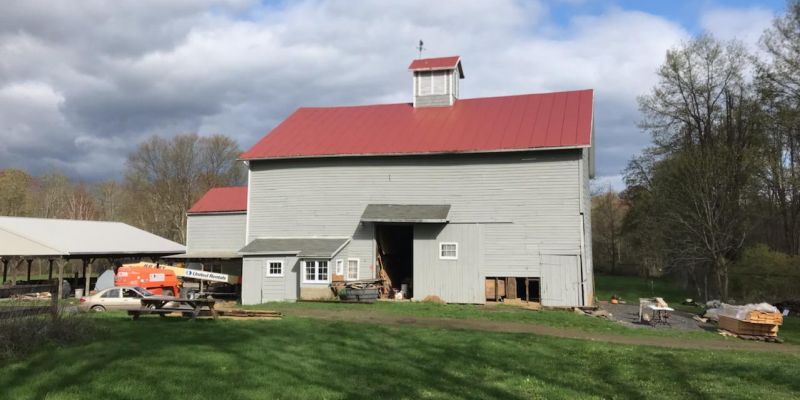 Hidden in Gardiner’s Barns, a Piece of History

In our last issue, we promised to discuss some of Gardiner’s own old barn rehabs. Two of them are featured here, with another two to come in the next issue. It may provide insight into how and why these Gardiner residents took on the job of restoration, but also offers a glimpse of our history as a community. There is something inherently romantic about a barn, especially one that has weathered the storms of life and still stands strong to tell of it. The following barns are great examples of this:

First farmed in 1743, the Phillies Bridge Farm Project is, according to the Wallkill Valley Land Trust and the Open Space Institute, one of the oldest working farms in New York. Currently, the Phillies
Bridge Community Supported Agriculture Program serves one hundred families in the area and is a completely not-for-profit organization. The Phillies Bridge Farm team says the barn is “between 150 and 175 years old” (circa 1844-1869). To give an idea of what was going on in our area around that time, the first Gardiner town meeting was May 17, 1853, and the Bardavon Opera House in Poughkeepsie opened in 1869.

The farm team discussed this restoration for years, and they were finally able to act this year. There used to be a second barn on the property, but its condition was so poor it had to be demolished for safety reasons, which made saving the big gray barn even more important. Its many historic features include original hand-hewn beams that make up the central structure, with a silo on the inside, which is very unusual. For a long time, it was thought to have been built that way, but during the reconstruction it was determined that the original barn, with the silo on the outside, was expanded and the addition encompassed the silo.

In order to get the barn rehab off the ground and properly executed, Phillies Bridge asked for and received input from several experts. In the end, one of the original founders of the Phillies Bridge Farm Project, Dan Guenther, who also worked for many years as a general contractor, took on the work. He and his wife, Ann, as well as their small team, were able to do the job for a fraction of what it would have ordinarily cost. Clearly, they did an outstanding job. 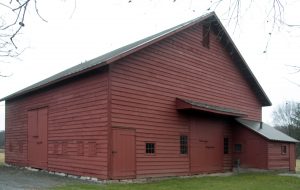 Tucked away on Crispell Lane, this barn is an example of a transitional form, somewhere between the classic Dutch-style barn and English traditions. The restoration was done in consultation with the New York State Division for Historic Restoration, in accordance with the New York State Historic Barn Rehabilitation Tax Credit Program we discussed in the last issue of The Gazette.

“1820” is inscribed on one of the overhead beams. The barn was built then, by Crines Jenkins, two years after his marriage to Rachel Hardenbergh, owner of the property located on the Hardenbergh’s Guildford patent in Gardiner. (For history buffs: Abraham Hardenberg was granted the Guilford Patent in 1743, the year the farm was established. Abraham was distantly related to the Johannes Hardenbergh of the Great Patent.)

In 1948, the barn was acquired by Vals’ parents, Letitia and Francis Echlin. Its many features, unique to the Dutch barn, include an almost square footprint on a stone foundation; a high, originally shingled, roof line; wide horizontal pine siding, and double-height doors on the south gable end. Huge oak posts and anchor beams divide the interior space into a central planked thrashing floor, with two aisle enclosures on either side for livestock and horses.

Vals and José dreamt of restoring the barn for years (a common theme amongst barn owners—this “dreaming” period). The before photos are impressive, showing the deplorable condition of the barn, with its leaking roofs, deteriorating sills & siding and sagging doors and windows. To obtain the considerable funds needed, they sold a property in New York and began work in 2016. The barn is now almost complete. A New York State tax credit against income also helped enormously in their case.

José and Vals supervised the project themselves and noted that, “Just to start, the barn had to be emptied of several levels of old hay and two feet of impacted manure.” Impacted manure is like rock, and had to be laboriously chipped out. Once that work was completed, a diverse group of craftsmen from various disciplines (framing, siding, roofing, painting, and window glazing) went to work.

When asked what personality trait helped them most in rehabbing their barn, they said, “nerves of steel.” Indeed.