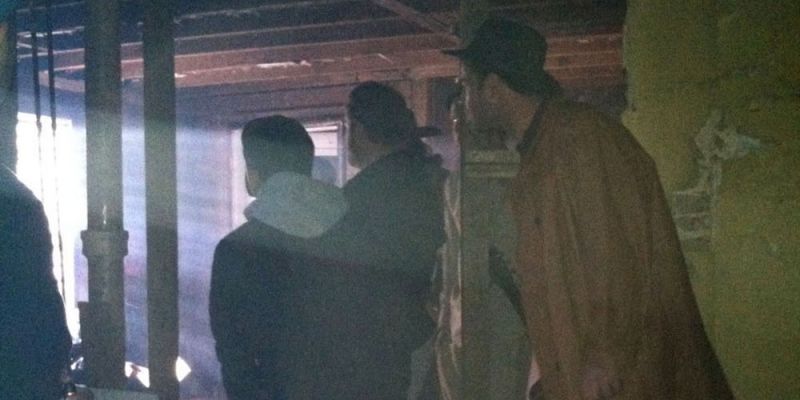 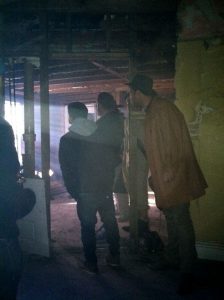 Preparing for the shoot-out on Main Street Gardiner

At first, all they wanted was a house. But when producer Ryan Biazon and director Rick Cordero realized that their real estate agent, long time resident Laurie Willow, had a wealth of knowledge about the local community, they asked her to find locations for the country western music video they were making for musician Dylan Reynolds. Cordero, who was nominated for Video Director Of The Year at the 2009 BET Awards and received the Best Film Award for his feature film, “Inside A Change,” is known for applying unusual shooting methods in his work, and knew exactly what he wanted.

The storyline has bad guys and good guys, a scene in a bar, a chase through a field and a culvert, and a shootout in a crumbling old house. It even has a horse. Willow knew where to find everything. She called Theodore Vlamis who agreed to let them film in the Gold Fox; Highway Superintendent Charlie Haynes led them to a six-foot culvert abutting David and Katherine Mechner’s property on Sparkling Ridge; Neil Rindlaub and Kathy Adorney had just the right hill; and Willow’s own horse, Ruby, became the hero’s trusty steed. Although this was Ruby’s biggest role to date, Willow acknowledged that she was a “good sport” about the ordeal, which required that she stand there and look like her movie star self.  Willow says, “Scouting for locations let me experience Gardiner from a whole new perspective, as a series of stills, a backdrop for a movie,” she said. “This area has enormous potential for attracting the movie industry.”

The video’s denouement took place in Susan Eckhardt’s Main Street property, next to the Post Office. After arranging that, Willow had just enough time to pick up her two grandsons from school and make it back for the shootout—complete with a fog machine, sun shining through the wooden window laths, and guns blazing.  “They loved it, of course,” she said.