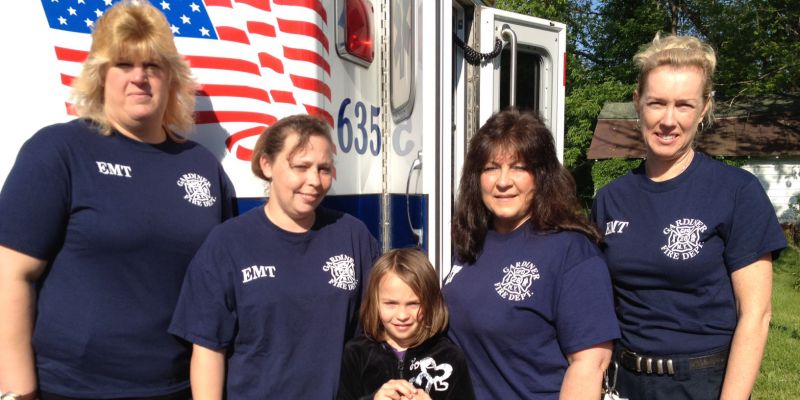 Medical Emergency: What Happens When You Call 911

If you call 911 from Gardiner, your call is received by an Emergency Services Dispatcher in a small brick building atop Golden Hill Lane in Kingston. He or she has undergone four months of training to operate a Dispatch Center console with five screens, a keyboard, multiple phone lines and a two-way radio. The screens show: a map of the emergency service units covering the location of the emergency; phone lines; an automatic vehicle locator; a computer aided dispatch (CAD) on which information is typed; and radio frequencies. Before the Dispatcher even answers the call, some information begins to appear on the screens automatically.

The Dispatcher asks a series of scripted questions to determine location (in case the connection is broken), precise nature of the problem, name of the caller, phone number, etc. When typed, the information appears next to a time stamp on the CAD screens of the team.

Callers want instant action and may feel frustrated by the questions.  What they don’t know is that another Dispatcher is using the information posted to determine the proper level of response (police, fire or emergency medical service), and while the first Dispatcher is still talking to the caller a response unit may already be enroute to the scene.

The first responders for medical emergencies are the 14 active members and officers of the Gardiner Rescue Squad. All are Emergency Medical Technicians (EMTs), with 160 hours of course and practical training in basic life support (BLS), including defibrillation and limited medication administration. EMTs then follow written New York State BLS Protocols. They are on call essentially from 6 PM to 6 AM daily and usually during weekend days. When they are not available the gap is filled by Paramedics from Mobile Life Support Services, Inc.

The highest level of emergency medical provider is the Paramedic, with 1,600 hours of classroom and practical training at a community college. Paramedics follow the Advanced Life Support (ALS) Protocols of the Hudson Valley Regional Emergency Medical Services Council. If they are also responding, Gardiner’s Rescue Squad always reaches the scene before Mobile Life. Our Rescue Squad initiates care and stabilizes the injured immediately, regardless of severity. On arrival minutes later, Mobile Life’s Paramedic would take over advanced life support, if such care were required. During 2011 in Gardiner, Mobile Life’s support was requested 305 times and they transported patients 176 times.

Scott Woebse, Vice President and Chief Operating Officer of Mobile Life, showed how a 911 call from Gardiner requiring ALS/Paramedic attention appears immediately on the screens in Mobile Life’s own command center in New Windsor, NY. The screens on their dispatchers’ consoles show the location of each on-duty vehicle, enabling them to route the nearest available ambulance to the scene of the emergency.

Since they cover Orange, Ulster and Dutchess Counties, Mobile Life maintains nineteen posting stations in its area. These stations normally include an office, extra supplies, charging devices, a bathroom and occasionally garaging space. The three stations closest to Gardiner are located at 2044 Route 32, Modena just south of Routes 44/55; next to the State Police building on Route 299 in Highland; and at the Highland Fire Department. Each Mobile Life ambulance is staffed by one Paramedic and one EMT.

Mobile Life has 50 vehicles and a staff of 400 to provide effective ALS coverage around the clock 365 days of the year including a medevac unit for the New York State Police helicopter at Stewart International Airport. Mobile Life bills for its services but in most cases, a patient’s insurer pays all or most of their charges.

Both Gardiner Fire and Rescue and Mobile Life work to reduce their response times. With a much broader coverage area, Mobile Life uses their own System Status Management Data Analysis to insure both staff and vehicles are in optimal locations to minimize response time. As calls come in, this requires a continuous reconfiguration of ambulance locations. In urban areas, the gold standard for response time is nine minutes.   In rural areas such as Gardiner it’s 12 to 15 minutes. During 2011, Mobile Life’s response time in Gardiner averaged 14 minutes.

Scott Woebse summed up: “Having local volunteers especially in rural areas is essential. They’re going to get there faster; they’re trained; they know what they’re doing; they’re equipped; and they’re going to initiate lifesaving care.”

To maintain and continue this vital service, Gardiner Fire and Rescue is always looking for new EMTs. The Department offers free training to anyone who becomes a member of the department, lives in the district and is 18 or older. To volunteer or to obtain more information, contact Helen Zimmermann at (914) 439-3389.