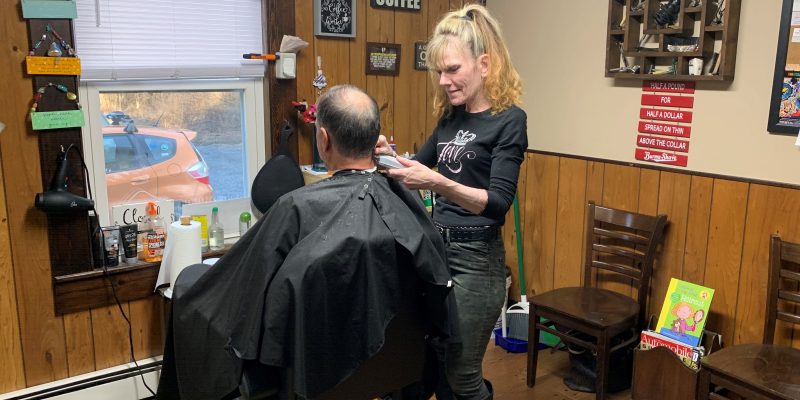 If you need proof, note that regulars are allowed to come in and schedule their next barber shop cut by picking up Dawn’s appointment book and entering their own name. Customers bring coffee, food, Red Bulls, and other sustenance to Dawn because “they know I never leave here.” She works 12-hour days, sixdays a week. Some give Dawn business advice. Others help with handyman work around the shop. Recently, a group of them signed $1 bills and tacked them up on Dawn’s mirror to wish her luck in her new space.

Dawn has been cutting hair in various locations in Gardiner since 1989, and probably knows most of the men in town who need a haircut. She is a barber; though trained and licensed as a cosmetologist, she has chosen not to offer the typical salon services sought by women. “I just love clipper work,” she says. As a result, about 80% of her clients are men. A cut is $12.

For the past eight years, Cuts by Dawn was located at 127 Main Street in the heart of downtown. Because she is usually at work by five am (her shop could be called “Cuts At Dawn”), regulars would drive by, see her through the large window facing the street, and beep a hello on their way to work. “Then they’d come back from work,” she says, “and it’d be dark and they’d wave and beep at me again and make a sign with their hands like, “You’re still there?! ”

Wanting to offer her customers a more comfortable setting, easier parking, and handicapped accessibility, Dawn moved a few blocks west this past October, to her house at 172 Main St (Route 44-55).

She never accepts walk-ins because she has many regular customers and is always booked in advance. She returns the numerous calls and texts seeking appointments at the end of the day so she isn’t distracted while cutting. “I love that I’m so busy,” she says. “It’s a little stressful, but I love my people. I have the best customers in the world. I enjoy their company and whenever I’m stressed, they help me relax.”

Now 54, Dawn was born in Rockland County and came to Gardiner in 1989 to join her then-husband, who lived here. She initially cut hair at Ricci’s Barber Shop in New Paltz, then took a leap of faith and launched her own barber shop out of a home she was renting at Tantillo’s Farm on Route 208. There, she began building up a regular customer base, and those customers followed her to the 127 Main location.

Now most of her customers have followed her to her new location at 172 Main St. It is safe to say that Dawn is a fixture in Gardiner, and she loves Gardiner back.  “Gardiner has been so amazing to me,” she says. “My customers and the town – I feel so blessed to be here.”

When she moved, good friends of hers (“My Three Guys,” she said) helped set up everything in her new shop. “They’re my heroes, I’m telling you. They moved me here. I went to the store one day to get beer and I came back and everything was up on the walls. They made my shop what it is. And now every time they come in for a cut, they bring their tools, just in case.” With friends such as these and customers who return again and again, Dawn sees herself cutting hair in Gardiner for quite some time. “I’ll be doing this for as long as I can,” she says. “As long as I can.”