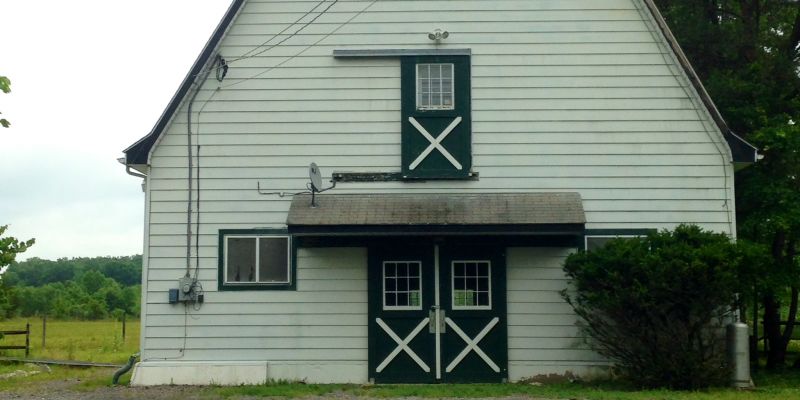 When Kristop Brown and James Walsh decided to brew and market their own beer, they started small, in 2013. (Beer Here. More Coming, Gardiner Gazette, Summer 2013) They built a 400 square foot brewery in James’ back yard. That’s about the size of a no frills one car garage.

James provided some of the history, “Grisette was brewed originally for miners during the industrial revolution in the Hainaut province of Belgium. As the men came out of the mines, women in gray frocks [gris is French for gray] would hand them this low alcohol wheat beer. Back then, it would be 4%. But you know, 4% is a little too low. I like 5% and a bit above. When I wanna have a beer, I wanna have a beer. Not 2% or 3% alcohol.” Yard Owl’s Grisette is 5% alcohol by volume.

Yard Owl’s products are featured at Bacchus, Jar’d Wine Pub and Rock & Rye, all in New Paltz; the Mountain Brauhaus in Gardiner; and Market Market Café in Rosendale. Their beers are also retailed at K & E Discount Beverages in New Paltz.

“We were brewing one day a week but bumped it up to two days a week this summer. That’s enough to supply the base customers we have. But demand is growing and unfortunately, we sometimes have had to turn people down. But we mainly want to keep those core customers who supported us from the beginning. 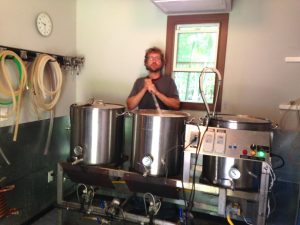 Kristop Brown brewing up a batch.

“We’ve done some keg beers such as special beers for the Mountain Brauhaus. But most of the beers we make are not draft. They really deserve that time in the bottle to condition properly and take their full shape.”

Beer has been produced for at least 7,000 years and until reliable potable water became available, ale and beer were the water substitute. James provided the rationale, “Brewing any beer from malt necessitates boiling the water, and bacteria are destroyed by fermentation, as well. The yeast metabolizes them and the alcohol also acts as an antiseptic.”

Some craft breweries start out with nothing more than one or two guys who like beer and want to make their own. That was not the case with Yard Owl. Kristop who’s the winemaker at Robibero Family Vineyards and Glorie Farm Winery, had been in that business for years and knew the science of blending and taste. James and his wife, Michelle, own the Mudd Puddle in New Paltz, so he knew how to manage a small business and had been studying beer making for some time. James elaborated, “We had a good understanding of what was to take place and did a lot of research. The professional brewing courses at the University of California, Davis, were hugely important. I would recommend those to anyone who wants to get involved with professional brewing. You really have to understand the science of what’s happening in order to produce a consistent product. And, we started small.”

To accommodate increasing demand for their products, Kristop and James expect to transfer operations to the white barn at 2867 Route 44/55 in Gardiner this fall. There, they will have 4,000 square feet of space for a brewery and a tasting room, both of which will be on the ground floor.

James elaborated, “In the tasting room, we’ll have for sale our own brews, but we also have the ability to sell New York State fermented products which would include beers from other craft breweries, wine and hard ciders. The latter is becoming increasingly important in this area. At some point, we’ll also offer light finger foods. And, of course, we’ll have Yard Owl glassware and T shirts for sale.”

The new facility will also make it easier to develop new products such as those already in the pipeline:  a classic saison, a tart and dry beer; as well as a dark winter brew, the latter exclusively for the Mountain Brauhaus.

Michelle Walsh plays a huge role, handling all the paper work. Dealing with the town and other requirements and the exacting demands of New York State’s Liquor Authority, all took and continue to take immense amounts of time, attention and care. As one example of the complexity, I asked James why there was a New Paltz address on their beer labels when their property and brewery are actually in the Town of Gardiner. James explained, “Getting the label approved is a project in itself, but it must show the mailing address rather than the physical address of the location of the brewery and that happens to be New Paltz. Once we move to our new premises, where the mailing address is Gardiner, we’ll have to print new labels to reflect that.”

I asked about the local approval process and Kristop told me, “The town administration was very supportive. Some neighbors had concerns, but when they understood the details of our plans, I believe we allayed their concerns. Our experience with the Planning Board was also very positive.”

Yard Owl has been cautious, taking one step at a time as its business has developed. When questioned about longer term plans, James said, “To build our business and grow. Our new brewery and tasting room will give us the scope for that.”