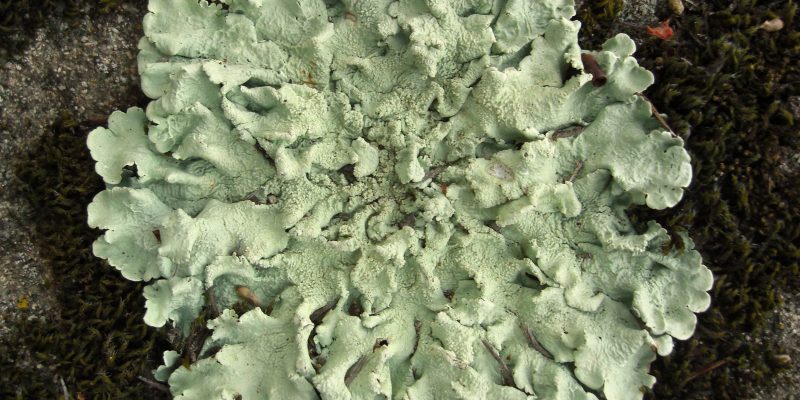 It’s a mild winter afternoon in Gardiner—grey and raining steadily all day—but finally sun breaks through and the wet tree trunks light up and all but glow with splotches of vivid light green, bright against the soggy grey landscape.  You may wonder, what are these green splotches that brighten your otherwise drab winter day? The answer: lichens. Mostly Flavoparmelia caperata, also known more poetically as common greenshield lichen.

If you don’t already know,  a lichen is a partnership of two separate organisms: a fungus (some of which produce mushrooms) and an algae (familiar to most people from stagnant ponds), which have agreed to go through life together. Often, both the fungus and the algae can live fruitful and productive lives on their own, and a typical Gardiner resident could go through life completely unaware of their existence, but when they come together to form a lichen, they take on a very different and leafy form, and when wet may take on a pleasing bright green glow….

Lichens are considered a mutualism, a partnership between two species in which both species benefit (as opposed to parasitism, when one species benefits and the other is harmed).  In this case, the fungus benefits because it lives off of the sugars that the algae produces, and the algae may benefit because it gets a moist, protected and cozy home nestled in the tissues of the fungus.  However, it may be more appropriate to view a lichen as a parasitism—a “fungus that has discovered agriculture,” farming crops of algae in its tissues, the algae held in a sort of agricultural slavery. Lichen researchers have yet to resolve which is the more accurate view of the relationship.

There are several species you will most commonly notice in Gardiner. One is the aforementioned Flavoparmelia caperata, one of the most common tree-dwelling lichens in North America. Many species of lichen are very sensitive to pollution produced by humans (from car exhaust, factories, agricultural fertilizer, etc.), and can only be found in wilder areas where the air is pure, but some—common greenshield lichen included—can be found gracing trees in towns and city centers (as well as forests) across the country.

Another widespread and pollution-tolerant species found on  tree trunks in Gardiner is Punctelia rudecta, or the rough speckled shield lichen. A  more muted greyish blue-green than the bright green rock greenshield, it can be most easily identified by the white spots which speckle its upper surface, hence its name. On rocks, there is a different cast of characters. Lichens usually specialize in living on either bark or rocks, though a few don’t seem to be picky. The most prominent rock-dwelling lichens in Gardiner are species of Xanthoparmelia. They can grow quite slowly, expanding outward in a circle as the years pass, and the size of their circles has been used to date weathered gravestones.

An article on lichens in Gardiner would be remiss not to mention Umbilicaria mammulata, also known as smooth rock tripe. It prominently covers rock surfaces on the ridge in Mohonk Preserve and Minnewaska State Park with flaky brown and grey potato chip-like growths. Though purportedly edible with proper preparation (the Lewis and Clark expedition is said to have subsisted entirely on Umbilicaria during a lean time), from my experience I can only recommend them if the alternative is starvation—and lichens grow slowly, so it’s best to leave them where they are.

There are many other species on trees and rocks around Gardiner!  Especially on older maples, oaks, or other hardwoods, you can readily find upwards of five or six different species, even if you don’t know what they are called. If you get bitten by the lichen bug and just have to find out more, I can recommend a lovely  (if lengthy) book, “Lichens of North America”, by Brodo et al. Next time you find yourself with some free time, grab a magnifying glass and spend some time studying the tree trunk in your backyard…. at the very least you’ll get some fresh air, and you might find the lichens quite beautiful. And should you find your trees to be absolutely covered with lichens, don’t worry, they do not harm the tree at all, but merely use it as a convenient perch.