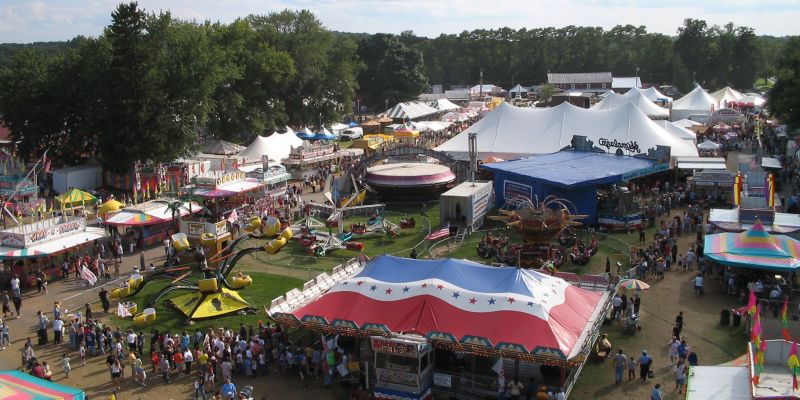 A Colorful History Of The Ulster County Fair

In the early 1800’s, farming was a major part of daily life. Farmers would brag about who had the best steer, who grew the best corn, or who might have the fastest horse. Eventually they started to have competitions. Horse racing was a big event and, of course, not to be outdone, the wives would bring their prize apple pie, strawberry jam, quilt, or other handiwork. Soon, the concept of the County Fair evolved.

For Ulster County it all began around 1869, when a few gentlemen from Ellenville facilitated the construction of the Ellenville Driving Park and held a small fair featuring horse racing and agricultural exhibits. It was such a success that it was repeated several times over the next few years.

The next logical step was the formation of an Agricultural Society to sponsor a real “Ulster County Fair.” In May of 1886, it was formally announced that the Southern Ulster County Agricultural Society had been organized. The fair remained in Ellenville for many years, but, in 1926, a fire destroyed the grandstands and starting gate, and bad weather and a Polio epidemic were financially catastrophic to the Society. The fairgrounds were sold to the Ellenville School District, and the 1932 fair was moved to Forsyth Park in Kingston. In 1936 it was held in the new State Amory on Manor Avenue, then returned to Forsyth Park and remained there for the next three decades. 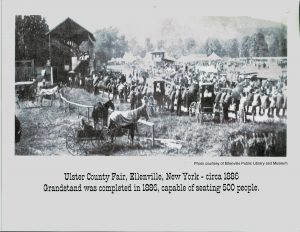 The Ulster County Fair, in Ellenville, circa 1886. The grandstand at left, completed in 1886, could seat 500 people. All photos courtesy Gary Newkirk. Visit our Facebook page for more.

In the early 60’s, the Fair Board realized it needed to extend the number of fair days and to find a much larger area to handle the ever-increasing number of exhibits and fairgoers. After looking at several locations, the Ulster County Agricultural Society announced in December 1966 that the 1967 Fair would be held on the grounds of the Old County Home and Farm in New Paltz. The first improvement to the grounds was the construction of a new 150’ x 300’ horse show ring and a much larger parking area. For many years, the Fair and the Poor House shared the grounds, but after the closing of the Poor House, the large brick buildings were torn down and the fair started to expand.

The old barns have been saved and remodeled to maintain the unique charm of the grounds; the two hay barns house a draft horse exhibit and the Poultry Exhibits; the old Pig Pen now houses the Horticulture Exhibits, and the Butcher Shop houses a fairgrounds museum. New Buildings have been built for Cattle, Sheep and Goats and Rabbits, and the Jane Barley Youth Building was constructed and is used for 4-H exhibits.

The Fair is managed by a volunteer Board of Directors with only two full time employees, a fair manager and an office manager. Each year, at the conclusion of the fair, planning starts immediately for the next year’s fair. The fair has grown to six days, with close to 100 part time employees during fair time and, of course, countless volunteers. With close to 200 vendors, the old poor house grounds turn into a small city with over 25 rides and games and fireworks lighting up the night sky.

There are over 50 fairs in New York alone and they are a boon to the local economy. Total revenue to the State has been said to be over $8 million, with the Ulster County Fair contributing over $149,000 in tax revenue to the county.

When I first started on the Fair Board I had no idea what to expect. The then manager told me he had a job he thought I would be good at and handed me a yellow legal pad.  He said it was the placing for all of the vendors that were coming in. Little did I realize that it was mainly just chicken scratching, and that the first vendor—the most cantankerous guy you could imagine—would be pulling up in less than 15 minutes. That first vendor told me there was no way he was going to set up where I told him to and proceeded to tell me where he was going to set up!

I did survive that day and quickly got an appreciation of what it takes to set up a fair. First, envision a totally open field and then think about building a city. Think about setting up 25 restaurants, approximately 100 store fronts, with everyone needing water, electric, and garbage collection. Next, think about adding a complete carnival with over 25 rides and many games. Also realize that these folks travel from fair to fair in their RV’s, so we also have to provide a campground for over 60 of them for the week.

Now let’s bring in around 50 cattle, 100 sheep, 60 goats, lots of rabbits and chickens and, of course, horses. How about sending out an invitation to everyone in the surrounding area to bring their home made crafts, vegetables, jams, flowers, etc., so we can judge them and award ribbons and prizes?

Why not add some National Entertainment Acts. Why not….it only takes a stage, a sound and lighting company, an agent, and seating. Did I fail to mention that you need lots of volunteers, and almost 100 employees to handle things like Security, Parking, Traffic Control, Fire, and First Aid?

Can things go wrong? I could write a book. Can the well pump go bad on a Friday night so you have to truck water in to keep the fair open? Can cows get loose in the middle of the night and wander around the grounds? Can a water pipe burst? Can a concession stand catch fire? Can it rain so much that you can’t park any cars in the parking lot and have to shuttle visitors from the college on school buses?

Why would you want to do any of this? I think anyone who is involved in fairs will tell you that it gets in your blood. If we get a volunteer, it is not long before their entire family is involved. That is certainly one reason I am celebrating my 31st fair this year. My oldest daughter Tracie started following me around when I was the concession’s manager and now handles that position when I moved up to Fair Manager. My youngest daughter Amy started working in the office doing all of the entries for our competitive exhibits and is still doing that job even though she now has two kids of her own. My middle daughter Kim, although not as active, has volunteered, and my grandson, Jonathan, is now deeply involved in the fair and proudly wears a Manager in Training Badge!

Our Board of Directors is made up of all volunteers that dedicate many hours during the year, and most take a week’s vacation to be at the Fair. Our volunteers come back year after year, along with many of our employees. If you talk to any fair person around the country, all will tell you: it just gets in your blood.