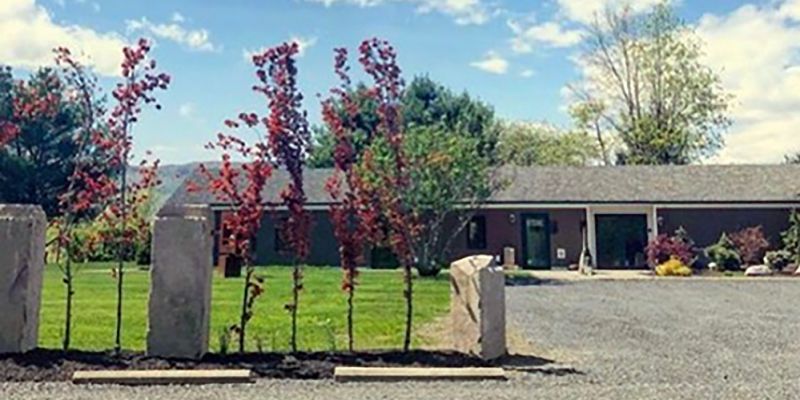 A Gardiner Love (and Success) Story

This past May, anyone driving around Gardiner will have noticed numerous small signs inviting one and all to the “Good Vibes Celebration” at Stone Wave on June 3rd. I decided to find out what Stone Wave and Sunflower Art Studios were all about.

Despite the iffy weather, I found a large group of adults and children gathered at the surprisingly beautiful Stone Wave campus, the former home of Utility Canvas, on Route 44/55 just west of the Albany Post intersection. Outside, some guests were involved in an hours-long Sun Salutation yoga ceremony, others played bocce ball on the lovely court out back. Most simply strolled, chatted and enjoyed the sculpture garden that surrounds the building. Inside, people were enjoying delicious free food and drink, and music provided by local musicians. Everyone seemed relaxed and happy—-a real community get-together.

And this is just what Liz Glover-Wilson and Keith Buesing envisioned back in 2015 when Sunflower Art Studios was in its infancy and Stone Wave was just part of Liz’s big dream. The story of how Stone Wave evolved in four short years is delightful, being a tale of personal romance and fulfillment for Liz and Keith, which culminated in the creation of a special place for all Gardiner area residents to participate in the arts and celebrate love and life.

Romance began it. Liz quit her corporate real estate investment job in Manhattan, in 2012, after the trauma of her sister’s death and the subsequent end of her first marriage. Her relocation to the weekend home on Halcyon Drive which she and her former husband had acquired was serendipitous. As Liz relates it, with a chuckle, “It happened that Keith Buesing was my neighbor- and I asked him, being a newly-single woman on her own in a house… if he would come help me with my lawn, and we wound up going out on a date…”

“And the rest is history,” says Keith. He has lived on North Mountain Road since 1979, and has been in Gardiner since 1971. His parents owned a nursery business in Rockland County, but moved to Wallkill when Keith was seven and commuted back and forth to run the business. Keith worked with his brother in the family business as a landscaper until 2002, when the nursery was sold to developers. Since then, he has continued to serve clients in Rockland County, while building a new clientele in Ulster County. In 2002, when the nursery closed, the brothers dug up, transported and re-planted the fantastic “StegoDile” topiary, now located at Ireland Corners and beloved by all us Gardinerites.

Keith’s passion is working with stone and plants to create unusual earthworks and plant sculptures within sophisticated landscape designs. He often uses found objects, with Hudson River driftwood and local stone figuring largely in his designs. The Stone Wave campus is home to at least a half dozen striking examples of his work, set within a beautifully designed landscape which fully utilizes the majestic views of the Ridge. The name “Stone Wave” itself was suggested by an aerial view of the Ridge, which looks like a huge, stone wave breaking amidst the forested hills surrounding it—-a natural “earth sculpture.”

But back to the story! After Liz and Keith met, they quickly discovered that they had mutual interests. Liz had, at this point, opened Sunflower Art Studios—-a non-profit organization dedicated to providing quality art classes to local children, regardless of their financial status—-in a commercial building next to the Gardiner Post Office. Soon, she began to formulate plans to bring a bigger dream into being.

Even before moving to Gardiner, Liz wanted to establish a “wellness center” in the area. She shared her dream with Keith and the pair began to search for an appropriate location. Strangely enough, as Liz tells it, “I would come through the light on Albany Post Road almost every day, headed home to the mountains, and I would get to this view and I would say “God, I want THIS view”, but I never paid attention to this building because it was so quiet …” And then, in March 2017, a friend alerted Liz to the fact that the Utility Canvas building was on the market. The pair immediately made an offer, which was accepted.

Liz was determined to open Stone Wave by June 3, 2017, in commemoration of her sister’s passing three years earlier. Keith and Liz took on the formidable remodeling job themselves, and, with the help of friends they managed to open as planned. “(Our) romance and creativity bloomed together—every little project we took on together was coinciding with our love growing”, says Liz.

The finished campus is a testament to their artistic and professional talents. The building is clean and spare, divided into two main areas —-one for the yoga and wellness classes and the other for the arts classes and events. All spaces can be opened up to create one flowing space when required. The large arts room has a huge wall of windows providing a panoramic view of the Ridge. Outside, formal garden spaces embellished with sculpture flow into open spaces for group activities.

The one-acre property has reached its limits and Liz and Keith hope to find a way to enlarge it eventually. The community has embraced Stone Wave and its warm atmosphere. Liz and Keith want everyone to feel welcome here—-they see their mission as much more than a business: “This is  a gift we wanted to give to the community.”

There is a wide range of classes offered—-yoga for all ages and competencies—-including a “by donation” Community Yoga class each Friday evening at 7 pm followed by refreshments. Sunflower Art Studios hosts many young artists ages 5-15 each season, reaching a total of over 2,400 students since opening. Instructors are all local professionals, who share in the Stone Wave mission to create something special for the community.

Each year, the space opens to the whole community for free-admission Wellness Day. Sliding-scale-fee art classes for adults are on the horizon. The space can now also be rented for special occasions such as weddings, parties, showers, and fund raising events. Liz and Keith hope that their beautiful creation will be discovered by more and more members of the Gardiner community and welcome all with open arms and big hearts.