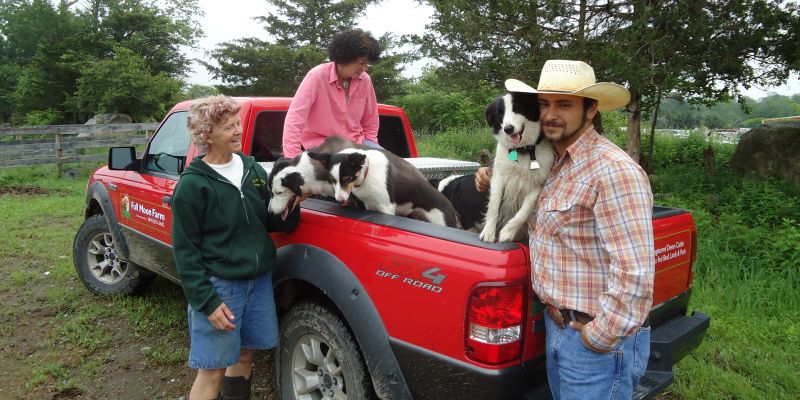 A Herding Tradition Lives On In Gardiner

Having lived for 11 years in New Zealand, it was thrilling to see Full Moon Farm’s truck rumble past one day with four avid sheep dogs in the back. It was like being transported back to that British-occupied, sheep farming Mecca of the known galaxy a few (thousand) miles south of here.

Humans have been using dogs for various tasks for a very long time, and Britain perfected that. In the South of England, a perfectly preserved dog skeleton over 4,000 years old was found among archaeological evidence suggesting that it had been domesticated and used to assist with the droving of livestock. Today, the American Kennel Club recognizes 18 herding breeds.

Laura Watson and Paul Colucci, the husband and wife owners of Full Moon Farm, own Samantha and Bailey, Border Collies, and one of the most well-known of those 18 breeds. Full Moon’s farm hands, Bud Christiana and Noreen Girao—the primary work force at Full Moon—bring Ann (Bailey’s sister) and Maggie to the team.

Where Full Moon departs from the British tradition is that they’re nice to their dogs. Many New Zealand farmers subscribe to the notion that dogs work better when they’re a little hungry and a lot scared of you. “Our dogs can’t be allowed to get overweight,” Laura said, “But they’re also house pets.” Bud and Noreen add that the dogs don’t like a lot of cuddling though. Bud’s dog, Ann, would not stay in the house at all if he didn’t insist. “She’d rather sleep in the field with the animals all night,” he said.

Full Moon has not always used herding dogs. In the first few years “the humans did a lot of running,” Bud said. “Now the dogs are indispensable.” Bailey and Ann in particular are from a working blood line and, “they’ve got it,” Laura said, meaning the herding instinct.

“It takes about three years to fully train a herding dog, but we’re never really done,” Bud said. “Every day we’re perfecting something.” The dogs respond to herding commands like “come by,”  “away” and “walk up,” which have specific meanings related to direction and trajectory, but Laura observed that commands are only one element. “It’s a coordinated effort. You’ve got the natural instincts of the dogs, the natural instincts of the animals they’re herding, and the human factor,” she said.

Laura, Noreen and Bud all agreed that the sheep dog trials that are so popular in Britain and New Zealand, and can be seen here at venues like the Rhinebeck Sheep and Wool Show, are very impressive. The difference on the farm though, Bud said, is that the dogs are not working within a controlled set of parameters. They have to think on their feet. He related an incident in which “30 head of Angus tore across the field.” Bailey, the smallest and youngest of the collies and their best “heading dog,” was dispatched. The herd had disappeared from sight, so there was no one to guide her, but Bailey turned the cows, ran them across 40 acres and put them in the barn. This took two and a half minutes.

Asked what their options might have been pre-dog, Bud shrugged. “Wait for the cattle to stop so you could go out on foot,” he said. The livestock also respect the dogs in a way they don’t respect humans. “If a dog approaches a cow, that cow is going to respond,” Noreen said. If a human walks up, it’s like, “Yeah, maybe later.”

Most of us lead busy lives. As a result, we have couch-potato dogs that have to be exercised in some scheduled way, so it was a thrill to see Samantha, Bailey, Maggie and Ann head off “to work,” giddy with excitement. It was also a pleasure to observe the palpable affection between dogs and humans. The old British herding tradition has not only been replicated at Full Moon Farm, but improved upon. A more perfect collaboration could not be imagined.