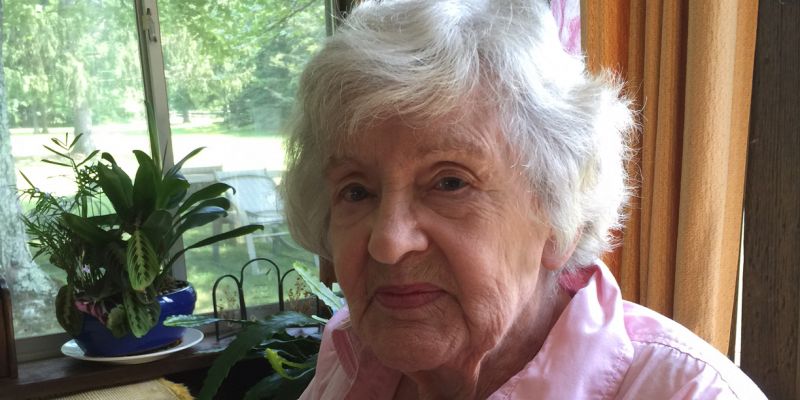 A Long Way From Home

What’s the shortest way to get from Coffeeville, Mississippi, to Gardiner, New York? The answer: World War II  . . . about which more later.

Lois Vick, the oldest of six children, was born in 1926 on her family’s 200 acre cotton and soy bean farm in rural Coffeeville—population about 425. (A possibly related North Carolina Vick, Joshua Washington Vick, MD (1843-1900), lent his name to the inventor of Vicks VapoRub as both the company and product name.)

After finishing school in Coffeeville, Lois attended Jackson Commercial College in Jackson, Mississippi. With World War II underway, she got a job working for the captain in charge of maintenance at an ordnance plant, constructed near Jackson in 1941 to produce igniter charges for large-caliber guns. There, she met a young draftee from New York City named Bill Stamatedes who was assigned to the commissary at the plant. Bill then moved on, serving as an MP in Alaska until his discharge as a sergeant in 1945.

Apparently Bill didn’t forget about the girl he’d met.  “Later, they were closing down the plant so I got a job at the Veterans Administration in Jackson,” Lois said, “And that’s where I was when Bill got discharged and came immediately to Mississippi.” Lois smiled at the recollection. The two were married in Jackson the end of 1945. “My parents were very upset at my leaving for New York City; but they accepted it as long as I was happy.”

Bill’s father had a three bedroom apartment at 181st Street and Broadway in New York City, so the newlyweds moved in for two years. “Bill worked at Bloomingdale’s and I’d gotten a secretarial job at House Beautiful magazine. He’d meet me for lunch.” Lois chuckled.

During the war, Bill’s older sister, Irene, had married George Majestic Sr., who wanted Bill to come work with him at his hardware store in Gardiner. “We had visited of course, and loved it up here,” Lois recalled. “We came up in ’47 and we’ve never left. We weren’t blessed with our own children, but George and Irene had one girl and three boys and they were in and out all the time.”

In 1947, soon after moving to Gardiner, Lois became secretary to Walter M. Wallack, the Warden at the Wallkill Correctional Facility. Wallack, warden from 1940 until his retirement in1966, had a Ph.D in education and was an early innovator of educational programs for inmates. Wallkill was in need of corrections officers and since Bill had been an MP in the Army, he went to work at Wallkill about a year after Lois.

Bill and Lois built their home on Dusinberre Road in 1958. They had a patio in need of shade, so Bill’s uncle dug up a few small maples in the woods. The patio was later converted into a closed porch and now the towering maples make that room the coolest summer spot in the house.

Often, Lois and Bill were able to commute to work together until Bill retired in 1978 at 62. Lois worked three more years before she could retire and during the interim, “Bill usually prepared dinner and he’d have a couple of girls who were alone come along. One was our niece and the other was a friend.”

For well over fifty years, Bill was a member of the Gardiner Fire Department and served as a Fire Commissioner while Lois participated in the Women’s Auxiliary and was active in the Gardiner Library, which had its origins during a 1974 meeting of the Gardiner Reformed Church’s Women’s’ Group at the Stamatedes’ home. Frances Scott suggested exchanging books. “We did that for awhile and then we got 25 books from the New Paltz Library and put them in a room at the church. People would go in and check out the books. That started it. Eventually, they gave us the old firehouse. Florence Tosti was a retired IBMer and she could get a newsletter printed for us. She also knitted a lovely afghan and pillow we put in a raffle to raise money for the library and low and behold, I won it.” Lois laughed, “. . . and I was a member of the board!” Lois is still a member of the Friends of the Gardiner Library.

Reflecting on her long and varied life and her sixty-eight year marriage to Bill Stamatedes, who passed away in 2014, Lois said, “We had a wonderful life together even though we had some disappointments.” Relatives and friends from around the corner and distant states visit frequently along with their very young offspring, as attested to by a shelf on Lois’ porch dedicated to children’s toys.