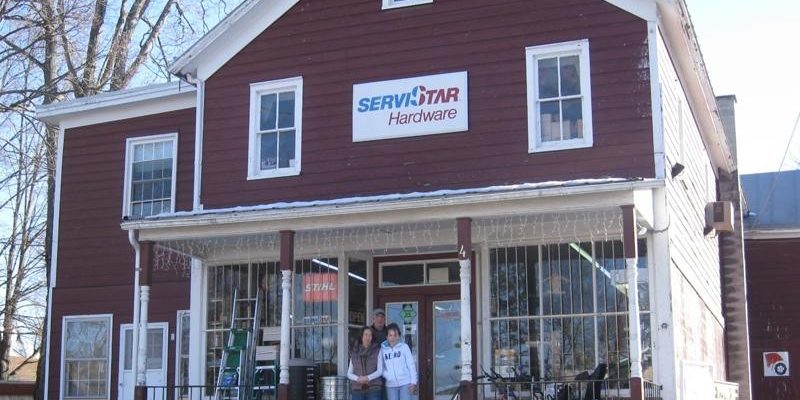 A Pillar of the Business Community

Majestic’s Hardware has been a pillar of the Gardiner business and social communities since it first began. It was 1947 when George Majestic Senior opened the first hardware store in a garage next to what is now HiHo Market.  In 1949, George bought the building that is now the post office and moved the store there.  Finally, in 1966, George moved the hardware store to its current site where it has been family owned continuously.

George Majestic was not only a store owner; he was also the town supervisor for 25 years.  As supervisor, he was a visionary who was ahead of his time.  He orchestrated the buying and setting aside of land to be owned and used by the community, which includes Majestic Park and the hundred acres of river frontage at the bottom of Steve’s Lane (the same land discussed in The Habitat Team Goes To The Dump, pg. 1).  George and his wife, Irene, had four children who all live with their families in Gardiner.  George, Jr., Carol, Rick and Bob all take an interest in the store, but Bob, Rick, Carol’s son, Mike, and Jessica Rawlins handle the day-to-day operations.

Majestic’s Hardware has survived the advent of the big box home improvement stores for a number of reasons.  A shopper can get expert advice as well as the materials needed for a project.  Stock in the store has recently been vastly replenished.  They are full with heating, plumbing and electric supplies as well as a wide variety of hardware.  Majestic’s sells Stihl products such as chain saws and leaf blowers.  The store also sells Toro lawnmowers and snow throwers.  Best of all, Majestic’s services what they sell in their fully equipped repair shop.  If your lawn mower beaks down in the middle of July or your snow thrower is acting up in a snow storm, Majestic’s has a full service department for fixing lawn implements and small engines.

Lately, Majestic’s hardware has opened a Web site on eBay which is a store selling tractor and mower parts.  To see the e-store, type http://stores.ebay.com/Majestics-Hardware?_rdc=1 into your browser.

As always, Majestic’s Hardware can fill your barbeque tank for only $15, cut and thread pipe, cut glass and make keys.  They are open Monday through Friday 8:00 to 5:30,  Saturday  from 8:00 to 4:00 and on Sunday for the weekend warrior from 10-2.  Stop by and see what is new at Majestic’s Hardware.