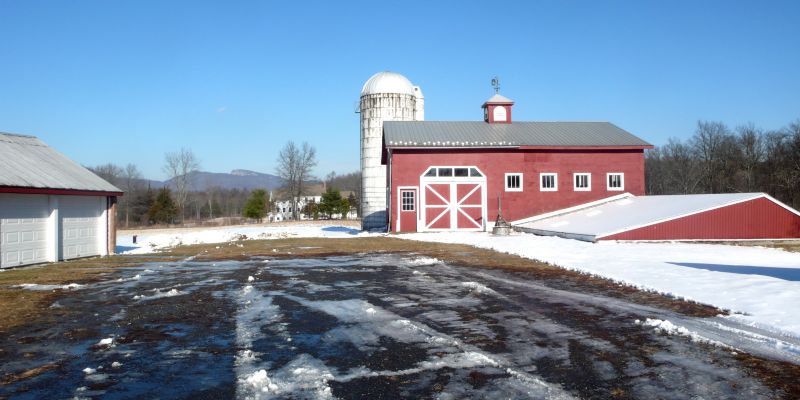 A Red Barn Continues Her Watch On History

There are a lot of beautiful red barns in Gardiner, many falling to ruin, but the barn with the success story is the one at 471 Guilford Road, owned by Cliff Appeldorn, an architectural designer. You can see how pretty she looks in the photograph, but she wasn’t so pretty when Cliff bought the property in 1986. Back then she was falling down, had big holes in the roof where shingles had flown off; even her enormous nearly 40 foot 200 pound beams were coming down. She was clearly not long for this world.

Cliff didn’t have the money to renovate her, so it looked as if she’d have to come down. But something got into him and Cliff put off doing that. Maybe it was feeling for the raccoons and bats that called her home. Maybe it was the old note he found in the barn, carved into a piece of wood and dated 1908, that said, “Putting hay away. Hot as hell.” But whatever it was, it caused him to do something that few of us would ever have given a second thought. He renovated her all by himself.

You’d probably have to take a shot of her from the air to get a real idea of how big she is, even today, and she was much bigger then. In the renovation Cliff took off a third of the front section, and lowered the roof by 15 feet.

The barn was built over two centuries ago, dominating the scene in spite of its neighbor, the Guilford Dutch Reformed Church, which was then one of the gathering centers of Gardiner and had been right next door since 1833. Very close by was the old covered bridge over the Wallkill (washed away in 1957) which made it possible for Gardiner residents living on the other side to get to the church easily.

The sexton of the church, Alonzo Lockwood, lived where Cliff lives now, in the house by the barn. Unfortunately, one morning in November 1908 Alonzo went to make a fire to warm up the church, came back to the house to make tea, looked out the window and saw the church burning down. He was too late to save it.

In its next incarnation, the barn and its silo became the center of the Agor Farm. Local resident Harold Agor grew up there. 50 cows lived in the barn, and a thousand chickens lived in a three-story chicken coop that is no longer there. Harold, who is a game warden, is the only person allowed to hunt on the 68 acres Cliff Appeldorn and his partner, Barry Berman, bought out of the full 168 acres that had been the Agor Farm.

Cliff and Barry almost didn’t get the property. They were all set to buy it but couldn’t afford the estimated cost to renovate it. Barry’s wife had her heart set on building a house in the field in back of the barn, with its deer and terrific view of the ridge, so they made it work by parceling the land, taking two of the pieces and selling a third.  It made the economics work out.

Cliff saved the barn and gave it its current look in 1992-1993, entirely by himself. This entailed using a “ratchet come-along and cable and rope system” so that he could pull on the rope to get one end of the huge roof trusses up a couple of feet at a time, then the other side, and the ratchet would not let the truss down. He had to build a couple of scaffolding towers to stand on, because there was no safe spot to stand on the barn structure itself until Cliff had strengthened it.

One day, he was sliding the open silo roof into place, when something came flying out and brushed its huge claws over his arm. It was a giant barn owl, realizing that unless it flew now it was never going to be able to get out of the silo again. Entrapment did not worry the barnswallows; they stayed until later, when Cliff fixed the windows. (Most of the windows he used in renovating the barn were the original windows of the also-renovated house.) 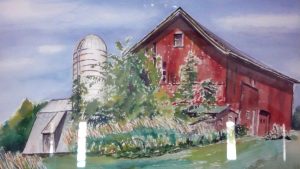 A 1986 watercolor by local artist Lillian Manning, who apparently used her imagination to depict the barn in its prime.

The barn had also once been used to store hay, as the note on the wooden board attests. A pulley system with pull-ropes was used to lift and move the hay around inside. Today, the barn is used as storage space by an antiques dealer, and for high-end mahogany wood for furniture making by Andrew Hunter.

There had been two farms on Guilford Road, and just a few months ago the other farm knocked down an even larger hay/dairy barn and silo, so I have to imagine that the red barn feels a special gratitude to the human, Cliff Appeldorn, who gave her a facelift and a whole new lease on life; perhaps she’ll get another century or more, with luck.