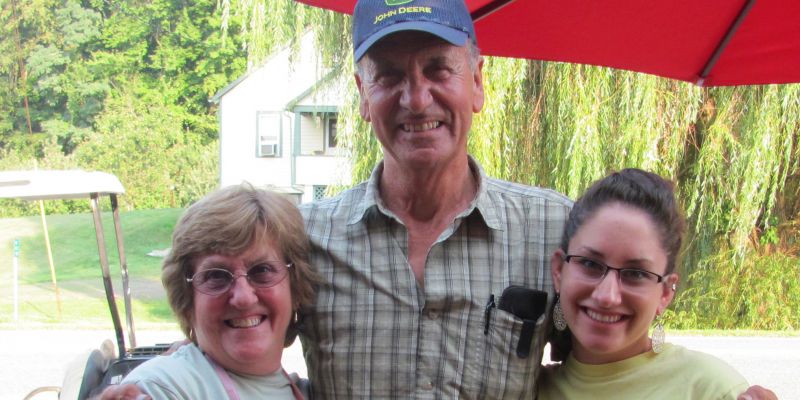 All In The Family: Four Generations Work A Gardiner Farm

When I went to interview the Tantillos, the first thing that caught my eye was a large, wooden frame filled to the brim with ripe, fresh eggplants.  I don’t often wax poetic over eggplants, not being a huge fan, but these were beautiful. There were other vegetables too, of course, baskets of tomatoes, shallots, onions, potatoes, zucchini and more; and there was fruit.

People were walking around with little red wagons filled with produce they’d picked themselves, there was a play set for the kids, an interesting little gift shop and an ice cream stand with a gadzillion flavors that also serves lunch and snacky foods.

Most importantly, there were pies.  Lots of pies. Generous yummy blueberry pies.  Until I asked to see the list this week, I had no idea how many different types of pies they make.  Considering my attachment to their blueberry, I am looking forward to eating my way through a good part of this list (!) which includes cherry, apple, strawberry-rhubarb, coconut custard, chocolate cream, mincemeat, pecan, pumpkin almond and more.

It surprised me to learn that the Tantillos also sow corn, rye and wheat, and that they are involved in external events, like RibFest, the Taste of New Paltz and Gardiner Day.

How does one business do this many different things? The answer lies in generations of hard work and a loyal, close-knit family with diverse talents.

Frank, Pete and Joe Tantillo bought 124 acres in Gardiner in 1932. Pete and Frank stayed, dividing the property into two.  Pete planted apples and other fruit trees and built a bungalow colony (now apartments,) on his piece. Frank also put in fruit trees, and started a farm. Until the fruit trees grew, he distributed pasta.

Frank’s son, Leonard, expanded his father’s farm. He married Beverly in 1963, and they both still work it very full time. All three of their children, and several of their grandchildren, work on the farm today, some part time and some full time.

Beverly and Leonard’s son, Frank, of Tantillo’s Landscape Supplies and Services, was helping his father bring in the rye the day I visited. Their daughter, Jeannine, was in the kitchen talking to me and coordinating everyone’s schedule simultaneously. She does bookkeeping, payroll, inventory and ordering; she helps cook the lunch special three days a week, and she coordinates all of the external events. Raffaela, their third child, is responsible for the pies I like so well; she was the baker (among other things) for 27 years and is “retired,” but she was working the day I was there.

Everyone multi-tasks. Raffaela’s daughters help out in the bakery, the farm market, the gift shop and the ice cream stand.  Jeannine’s sons can repair equipment, and both work on the farm when they’re not busy with school or full time jobs.  Her daughter, Jessica, has brought her computer skills to the farm. She helps out generally, and has also taken on social networking, the design and printing of menus, signage and photography. This is in addition to having just completed her degree at SUNY New Paltz in Environmental Geochemistry.

This year, Jessica is working at the farm while taking the accounting and microeconomics she needs to start her MBA in Sustainability at Bard next fall. She says, “Bard’s mission is to include