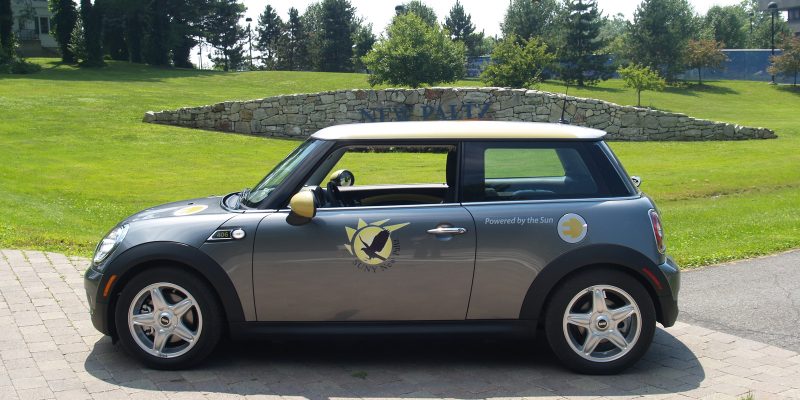 An Electric Car in Gardiner!

Instructor Michael Otis of Gardiner and instructional support assistant Thomas LaBarr of Beacon, both staff at SUNY New Paltz’s Electrical & Computer Engineering Department, are driving two Mini-E Cooper all-electric cars for a year.  They are among 450 people in the U.S. to participate in this test program.

Over the next two semesters they will drive the lithium-ion (35 KW) battery-powered cars to raise public awareness.  The electronic technology behind the vehicle will also be included in the ‘Renewable Energy’ course Otis teaches at SUNY.  The college is planning to set up solar-powered battery stations.

Testing includes recording battery charge and discharge rates, which can be significantly affected by conditions such as temperature, humidity, and driving habits.  One of the major differences between a gas-powered car and an electric-powered vehicle is regenerative braking: any time the accelerator is not being depressed by the driver, the electric motor runs in reverse mode and behaves as a generator, recharging the batteries.

The “Mini E” gets 105 ‘real’ miles per charge (mpc) and has all the amenities of a standard Mini Cooper, although the mpc are significantly reduced if you run all the accessories.  It has a (150 KW) AC induction motor that provides over 200 horsepower and a top speed of 95 mph (governed). Calculations show that it gets the equivalent of 95 – 105 mpg.

This is advantageous to the college as it is going ‘green’.  Otis is deeply involved in the building and implementation of a solar car with the students.  In June the Solar Car Team competed in the Formula Sun Grand Prix Solar Car Race in Texas—the first time SUNY was ever involved.  SUNY finished 6th.  Otis also worked with two students, Arthur Cecchini and John Werner, in building an electric car for their Senior Design Project.  Congressman Maurice Hinchey was at this presentation, drove the car, and was extremely impressed with the students’ efforts.

If you are curious – email Mike at otism@newpaltz.edu and come see the car!