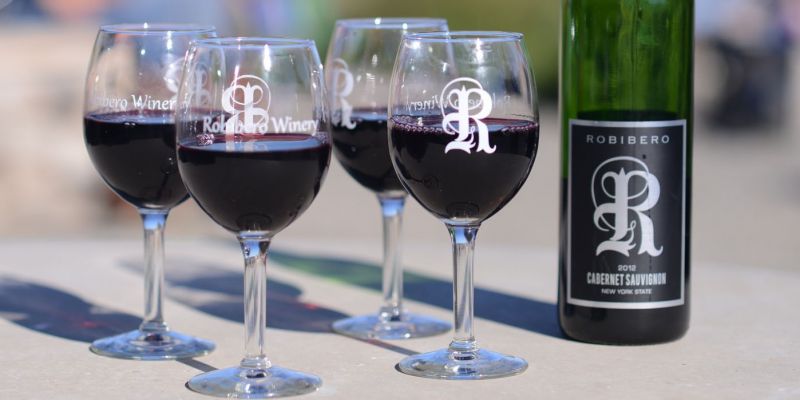 An Expansion at Robibero Family Vineyards

[For reference, an earlier article on the Robibero Winery was published in Gazette issue #40 (Fall, 2018). It provides the background for this article.]

Anyone who drives past Robibero Family Vineyards on Albany Post Road can see that a large structure is being erected on the premises, just to the South of the winery tasting room. Construction has been going on for several months, and the intention is to expand the storage and wine-making capacity of the property.

Harry Robibero, a businessman, purchased the 42-acre property in 2003 when it was occupied by the Rivendell Winery. When Rivendell left the premises in 2007 the question was asked at a family meal about what should be done with the property and its tasting room. Tiffany, Harry’s daughter, and her then-husband Ryan, came up with the idea of creating a winery of their own. The winery opened in 2010.

Several years ago, Harry cut back on his regular excavation and home-building business so that he could concentrate on other projects. He owns rental properties, and that contributes to the funding he needs to build and expand the winery.  Like many high-energy, self-motivated people, Harry needs a project to keep him busy and productive. He works very slowly and takes his time, in no hurry to complete it.

The basic issue behind the project is the need for more storage. They had outgrown the space they had in the original building. Storage tanks could be twice as tall now, as there is a great deal of height in the new building. Tank capacities could now rise from 2,000 to 4,000 gallons.

What this means is that while current wine production is about 3,000 to 4,000 cases, more storage capacity would allow production to go up to 7,000 to 8,000 cases, but not more, as Robibero wants to stay at a small, manageable size as a micro-winery.

The footprint of the new structure is 4,800 sq. ft., while the mezzanine is half of that. Furthermore, Harry has installed 3,000 sq. ft. of solar panels on the roof, with a capacity of up to 50KW output. Given how much electricity is needed to run the equipment, including the HVAC to cool the entire building, solar produces just about half of the total power needed to keep the place running.

In addition to new storage tanks and a barrel room, there is now space for vineyard equipment like tractors. Elements of construction that especially interest Harry as a builder are floors and ceilings. Among the things that Harry wanted to accomplish was to make a smooth, polished floor for the barrel room that would be easy to clean, given the amount of spillage that occurs when filling, moving, or sampling barrels.

By law, the tasting room is closed, but the veranda is open and actively serving customers. Their wines are made from purchased fruit from the Finger Lakes, Long Island, and from their own small vineyard. Most are made from vinifera varieties like Chardonnay, Riesling, Merlot, Cabernet Franc, and so on.  However, one of their most popular wines, Rabbit’s Foot (non-vintage) has a base of 75% Baco Noir, a hybrid variety, plus Merlot and Cabernet Sauvignon, and the prize-winning New Yorkie Rosé is a Bordeaux blend that quickly sells out.  It is recommended that if you wish to taste wine you call ahead to make a reservation 845-255-9463. For more information about Robibero Family Vineyards, visit robiberofamilyvineyards.com.