Everyone knows the saying, “A picture is worth a thousand words.” Why is that? Probably because, as humans, we relate most emotionally and fiercely to an image. This may be why throughout history, art has long been a vehicle for activism. If you want people to care about an issue, you must first get them to pay attention. 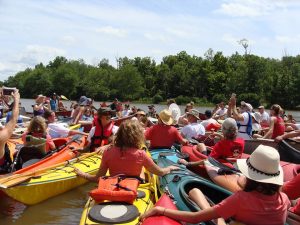 Much art tries to convey an opinion or message, so it is not hard to find examples of activism in art. Maybe you have seen the Norman Rockwell painting of an African-American girl being walked to school by four U.S. Marshals? The picture, entitled, “The Problem We All Live With,” directly addressed racism in America in 1964.

Or perhaps you know of the famous British artist, Banksy? One of his most popular works, “The Flower Thrower,” depicts a man bombing the establishment with flowers, seeming to say, “wage peace, not war.” Most recently, and a bit more locally, you may remember the “Fearless Girl” sculpture by Kristen Visbal that was installed in New York City, in front of the Wall Street bull, in March, 2017, just in time for International Women’s Day. The statue was a way of calling attention to the gender pay gap and lack of gender diversity in the corporate world.

But art doesn’t always have to address national or global issues. Sometimes the issue is a local one, affecting a smaller, but no less passionate, group of people. Such is the case with our next example.

On July 29th the community activists brought their kayaks and canoes to Tillson Lake and used the watercraft to spell out SOS (for Save Our Sanctuary). Keith’s son, Cody Buesing, is a filmmaker and captured the event with his drone.

If you have been following the Tillson lake developments you know that the 100+-year-old lake has been slated by the Palisades Interstate Park Commission (PIPC) and NY State Parks Department to be drained. Keith expressed the sentiments of many when he said, “Tillson Lake is in danger of being erased from our community. I know that there are so many people that recognize Tillson Lake as the precious jewel that it is.”

Keith works mostly with topiaries, stone and wood, and this was his first project that was devoted to a cause. He stated, “mostly my work is inspired by quirky whimsy. Something unexpected that would make one smile.”  However, the Tillson Lake SOS. photo was inspired by an aerial photograph by Sebastien Copeland. It depicts global-warming awareness activists in Antarctica, lying in the snow in colorful snowsuits, spelling out “SOS.”

Keith described himself as “a local who recognizes the value and beauty of a precious body of water.” He went on to say, “There are few opportunities in this area to experience the simple joy and beautiful sensation of paddling. Using instruments of such simple design and so ergonomically perfect, that they haven’t been improved upon for thousands of years, to glide quietly on smooth water, powered only by muscle, in a scenic setting, in any conceivable weather, leaving nothing behind but ripples.”

Keith’s love of his experiences on the lake inspired him to take action through his art, showing us again, that activism can take many forms.