Andrea McFarland’s intricate pastel paintings had me fooled on first glance. I thought a photographer had captured the essence of the dramatic Shawangunk landscape. But it was the subtleties of an accomplished pastelist that made her impressive renderings fool me!

Andrea’s road to artistic competence took many turns, deviations and one major snowboarding bump before personal discovery was possible. Brought up by an impressionist landscape painter and a photographer, in California, her immersion in the wonders of the natural world made a deep impression on her.

She was a mom at 21, and all her creative efforts went into costumes, birthday cakes, quilts and fabulous gardens. Andrea’s earlier plans were to be a wild plant botanist, but then psychology beckoned and it wasn’t until she was 40 that Sonoma State University gave her a bachelors degree. 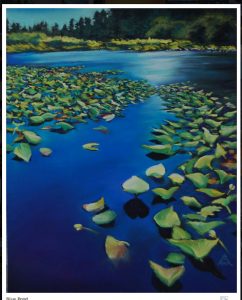 For thirty years, Andrea played traditional Irish fiddle music (and still does, with her partner Jonathan Pazer, at places like New World Home Cooking in Saugerties and some more local venues).

If it hadn’t been for a snowboarding accident that broke her wrist, she might not have tuned in to her other artistic side. While healing, and not able to fiddle, she took up drawing in different mediums and then finally discovered dry pastels. Within two years, she was selling her work. She moved east to Gardiner after meeting Jonathan in music camp. He met Andrea and gave up his law practice to follow his passion—creating manipulated abstract photographs. Together with Jonathan, and partners Donna Weil and Ken Aspin, they founded the Gardiner Open Studio Tour (GOST Artists) a flourishing Gardiner institution.

The natural world is Andrea’s “passion and refuge.” The rugged ecosystem she encountered here in Gardiner—so appealing to hikers and climbers—is where she tries to recreate a hiker’s perspective of landscapes. “They are potential journeys that can draw us out of our usual tired circle of thoughts in to a more spacious place,” she says.  “I hope to simply convey the inherently generous, fluid and mysterious nature of the world I see.”

After only a short time in Gardiner, she has come into her own by re-creating the Shawangunk Ridge and Valley landscape meticulously, and by giving back to the community with GOST Artist projects. All the while, her work gets more and more impressive. She uses dry pastels on colored sandpaper, preferably black. The pastels are long lasting, almost pure pigment, that result in vivid colors and a velvety texture. Andrea’s art is very hands-on as she often uses her fingers to blend colors. She has just begun to work in oil paints and the results are just as intense!

She is now represented by the Mark Gruber Gallery in New Paltz and often shows in Wired Gallery pop-up shows at Mohonk Mountain House.

To see more of her striking accomplished pastels, you can go to andreamcfarland.com, take a GOST Artists tour on the first weekend in May or Columbus Day Weekend, or get in touch via (971) 409-2125 or mcfarland.andrea@gmail.com.

You will be astonished, as I was, at how a look at her work is almost as good as a hike in the Shawangunks!