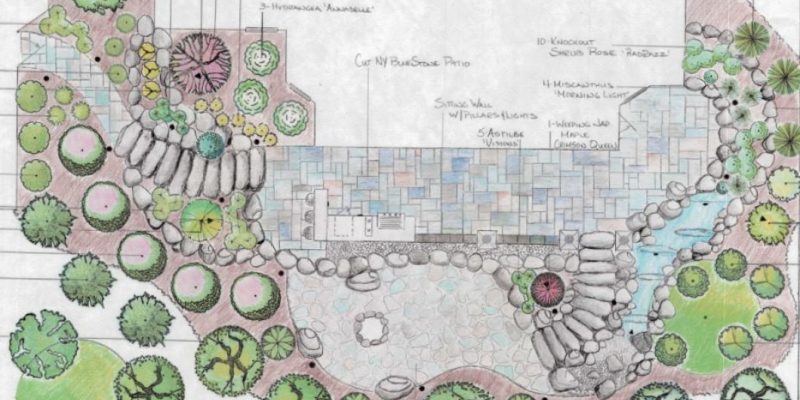 The origin of Artscapes, Tony Osborne’s landscaping business, is a four-generation Gardiner story.  While growing up in Manhattan, Tony spent summers and weekends in Gardiner with his mother, step-father and sisters. They worked on his grandparents’ farm, rode horses and swam in the Wallkill River.  His beloved grandmother, Letitia Echlin, was a major influence and her garden became an early classroom and studio.  She and Tony’s grandfather, Francis Echlin, head of neuro-surgery at Lenox Hill Hospital, bought the farm on Crispell Lane more than 60 years ago.  “He wanted a place where his wife and children could go, where they would love the land and where they would be safe,” Tony explains.  Tony’s grandfather was seeking a refuge—a place to relax and de-stress from his long hours in surgery. That refuge eventually became his grandson Tony’s home, his touchstone, and an inspiration for all that was to follow.

Interested in the creativity of food preparation, and with dreams of opening a restaurant, Tony moved up to Delhi where he earned an Associate’s degree in Restaurant Management in 1981.  He was spending an increasing amount of time rock climbing in New Paltz and it was here that his interests evolved. He entered the fine arts program at SUNY New Paltz, graduating with a BFA in Sculpture and Metalsmithing in 1987. The formidable and gifted Kurt Matzdorf, founder of the department, was one of Tony’s first teachers and mentors.  Kurt advised Tony to “always have your eyes open and look at history and what’s come before.” It was the incredible natural forms— the texture, the lichen, the cracks in the rock that Tony carefully “looked at” while rock climbing, and it was those forms that so heavily influenced his sculpture and, eventually, his landscapes. “All those experiences in the studio made me think bigger, become more creative,” he adds.

Armed with two diplomas and seeking to earn a living, Tony turned to what he knew best—the land, rock, and plants.  In all of these he saw beauty, and his fifteen-year-old business, Artscapes Landscaping, became a creative outlet as well as a business. “I wanted to paint or sculpt on the ground and it’s been a great way to make a living.”   But moving rocks that weigh many hundreds of pounds is physically demanding and, looking to the future, Tony decided to explore yet another creative venture.  He enrolled in a design program at SUNY Ulster.  Here he studied graphic design and 3D software modeling under Sal Ligotino with an eye toward product design in the future.  He has praise for the program that, Tony explains, provides “real world” experience.  The head of graphic design, Sean Nixon, instituted a program that invites local business owners and non-profits to come in and have the young student designers create a logo, tri-fold brochure or packaging—for free.  The real world interaction provides wonderful experience for the students, while the businesses benefit from the expertise of a respected design department.

Reflecting on his many creative endeavors, Tony muses, “We’re lucky if we have the opportunity to make things beautiful, whether food, landscapes, sculpture.  It’s all part of the same circle. The satisfaction that you get from that is unsurpassed.” To enjoy some of that beauty including examples of Tony’s sculpture, visit the Artscapes website at www.artscapeslandscaping.com.