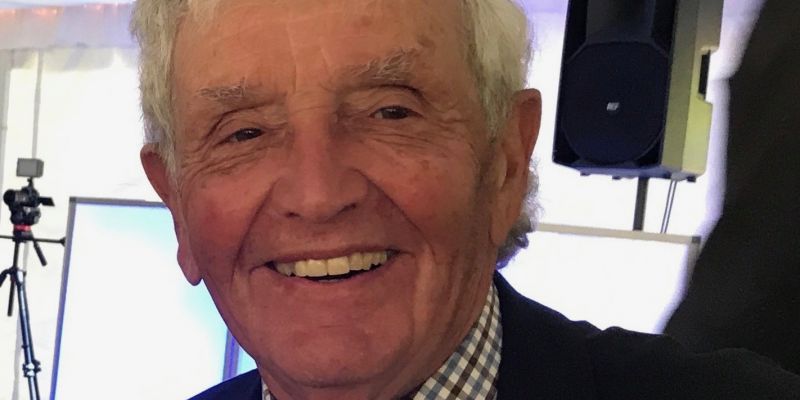 Bart Colucci: Some Men Should Have Mountains

Wherever you travel in or near Gardiner, you see the name Colucci. The name is as ubiquitous as some of the family names in Gardiner that date back much further in time. It all began with Bartholomew “Bart” Colucci.

When Bart passed away last November, he left behind four hard working adult children with strong ties to Gardiner; three still live on the family farm here, and one lives only as far as Tillson. All four have followed in the family footsteps, as entrepreneurs in their own businesses in real estate sales, excavation, construction, home restoration, and farming

At Bart’s memorial service, which I attended with more than 200 others, his eldest son, Paul, delivered a moving and uplifting eulogy in which he attributed his and his siblings’s successes to  Bart and his wife, Doris; they taught, by example, the value and joy of hard work. Paul’s sister Terri explained Bart’s work philosophy, “If you enjoy what you do, you don’t feel like you are working. While most people stayed in the same career until retirement, Dad was always reinventing himself and starting something new. Whatever he did, he enjoyed it and never failed at it.”

Bart began working on the family farm as a young boy in Hyde Park. Then, he and his brother started an excavation business. After marrying Doris, he became a cow breeder (using techniques like artificial insemination), then a butcher at a supermarket, then opened his own butcher shop. When Bart decided to begin home delivery of meats from his shop, the entire family participated. He operated the business from the home he built on a parcel of farmland that Doris’ parents gave them. “We all grew up working hard alongside my parents,” Terri told me. “I still see people today who remember my family because of the home delivery business.”

After a few years, Bart found that lifting hind quarters of beef wasn’t good for his health, so he began a new career in real estate, opening a real estate office in Gardiner, and eventually moving it to New Paltz.  After years of selling, Bart decided to become a licensed real estate appraiser.

At the same time, he also started Meadow View Farm on Phillies Bridge Road; a return to his roots in farming.  Starting a small, all natural fruit and veggie farm in the 90’s and growing it to the point where he needed farm help, he brought in Roberto Rodriguez and his family to live on the farm, to care for the crops and grass-fed beef and chickens.

Bart sold the crops at his roadside farm stand on the honor system, but with more crops than he could sell from there, he became one of the founders of the New Paltz Farmers Market. As recently as four years ago, Terri recalls fondly, she was getting up on Sunday mornings, helping Bart load supplies and produce, and then heading into New Paltz to help set up at the Farmers Market.

She explains, “Many of Dad’s customers would come just to talk to him, enjoy his infectious smile and twinkling eyes. As a matter of fact, if it wasn’t for the farm market, Dad would not have had his second chance at love.  Many women will tell you that, after Mom passed, they had a crush on Dad, and one won his heart. Together they were able to share a dream Dad had had for years; they built a new home on the farm hill and looked out at the beautiful sunrises and sunsets over the mountain. Dad followed his dreams!”

Bart’s impact on Gardiner will be a positive force for a long time to come. In his eulogy, Paul opened with the words, “Welcoming, humble, accepting, gregarious, quick witted, kindhearted, and a loving proud father.” Toward the end, he stated, “Let us bid him farewell as we celebrate Bart’s authentic soul.”  Indeed, he was authentic, loving and hard working.