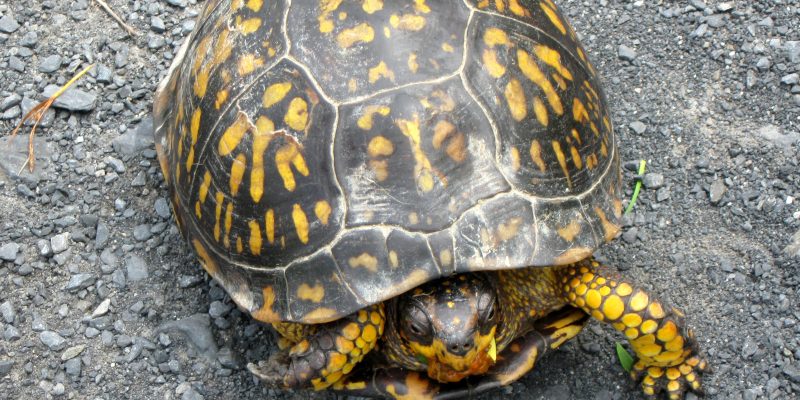 Have you seen an Eastern Box Turtle crossing your road?  This is the time of year when turtles have emerged from hibernation and are mating in preparation for egg laying in June. Painted turtles are commonly seen on logs in ponds, and  large snapping turtles are often seen in yards and fields. But the Eastern Box Turtle (Terrepene carolina carolina) is the one I’d like to call your attention to because it is on New York’s  Species of  Special Concern list, is especially beautiful AND, it needs your help!  You can do two things:

First, if you should see one of these turtles in harm’s way, please gently pick it up and place it on the other side of the road in the direction in which it was traveling.  (Do not pick up Snappers.) Road kill is a major cause of box turtle mortality. Drive carefully and keep a lookout for these six inch long reptiles. I have been monitoring a box turtle population since 2005 and was called out last year to two local road kills, one a female with eggs. One expects this on route 84, but the carelessness of local drivers is depressing.

Do NOT pick up a box turtle in a garden! Gardens, lawns and shale driveways with their nice loose, moist soils are frequently used for nesting. I receive phone calls from people who are concerned because they have found an immobile turtle in their garden and feel that they should transfer it to a wildlife rehabilitator. Don’t!  The turtle is probably taking a rest and will move on when he or she feels like it. It is also not legal to remove wildlife without authorization.

Second, the other major cause of box turtle mortality is mowing. If possible, postpone  field mowing in May and June altogether, especially along the sides of driveways and woods. Be careful when mowing lawns. If you have a big field that is not used for haying, think about postponing your mowing until late fall.  This will also help preserve bird, butterfly and insect populations. When you do mow, start from the center, if possible, so that the turtles have a chance to escape.

If you are so lucky as to see one of these lovely creatures, enjoy it! The turtles may look alike with their yellow scute designs, but each one has a unique pattern. I am able to identify repeaters from year to year just by photographs. Admire him or her (males usually have red eyes) but respect their privacy; do not disturb them.  Given a chance, they could live longer than you. Send me a photo at “contact” on my web site!  (www.boxturtlesny.com)