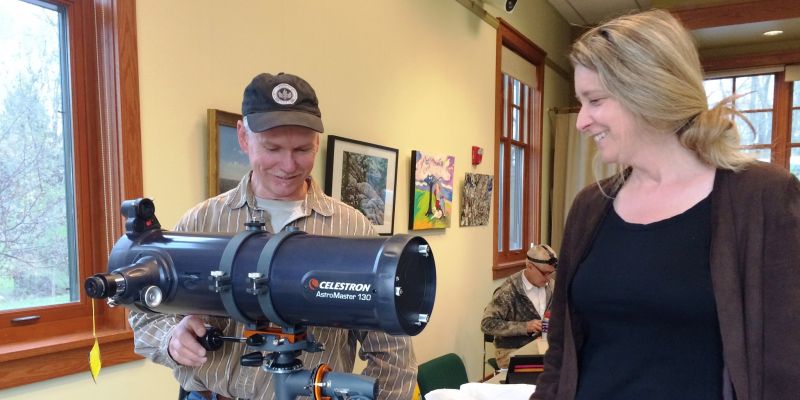 Broken? Bring It. We’ll Fix It …For Free

Have a telescope that you don’t know how to operate?  A necklace chain that’s broken? A lamp with a secret (to you) bulb compartment?  A vacuum cleaner, toaster or telephone that doesn’t work? Visit the volunteer “repair coaches”—electricians, seamstresses, mechanics and all-purpose fix-it pros—at Repair Café at the library the fourth Sunday of every other month from noon to four pm. (The next one will be Sunday, August 23rd.)

The Repair Café Foundation celebrates its fifth anniversary this year.  You can bring broken items to more than 700 Repair Cafés all over the world. Begun in 2009 in The Netherlands, the Cafés have now spread to 17 countries. Foundation Director Martine Postma has written a book, Weggooien? Mooi niet!, (Toss it?  No way!), so far available only in The Netherlands and Belgium. The Gardiner Repair Café began this year, sponsored by the library and coordinated by Gardiner’s recycling coordinator, Wendy Toman.

My first stop at the June Repair Café was the telescope, a most impressive Astro model that was a present to Gardiner resident Dina White from her brother. Dina has a young son and figured she’d better learn how to use it. Repair coach Patrick Murphy was demonstrating how.  When asked how he knew about such things he replied that he was the son of a handyman farmer in the Midwest. In his family things were always fixed; nothing was thrown away. I returned two months later to have Patrick sharpen a knife for me.

Next was a lamp, which repair coach Armand Rusillon had operating in short order. Armand’s 12-year-old daughter, Azalea, was at another table making and repairing jewelry, and also passing out cookies.  She intends to add felting to her jewelry line, and held up an example of her work.  This very poised young lady is also an actor (her preferred  term) with Rondout Repertory Theatre and has been in four Shakespeare productions.

Kids are as involved in learning about repair as their parents are. Wendy Toman explained that all those parts of a vacuum cleaner, toaster and telephone spread out on the floor were parts the kids had assembled and disassembled earlier.  At this point a man came in complaining that his vacuum cleaner wouldn’t work.  I left as mounds of what looked like cat hair were being dumped on the floor.

This enterprise is not only very useful, but also highly entertaining!  What a great way to, as Patrick explained, “get things out of the waste stream.”