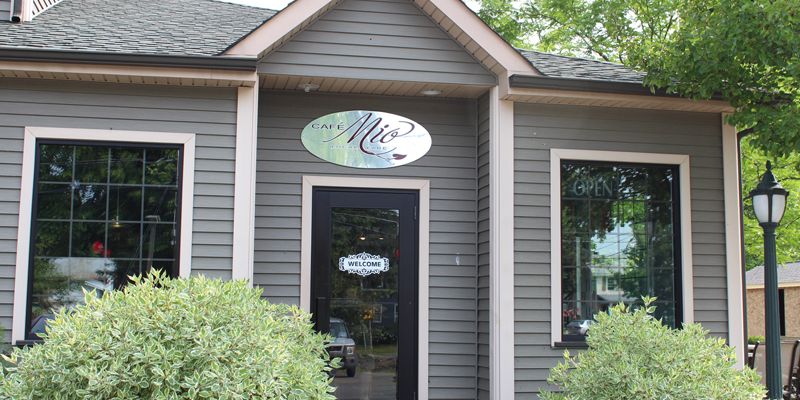 Michael Bernardo, owner of Café Mio, Gardiner’s newest restaurant, comes by his love of food naturally.  He grew up in Reading, Pennsylvania, where his aunt owned an Italian restaurant and his parents ran a small catering business out of their home and converted their basement into a chocolate factory.  Michael’s  mother still teaches at a local Catholic school; his Dad runs a nursing home.  But food has been an important part of Michael’s family’s life since early childhood.  “I’ve been around the food business since I was five, helping at catering gigs since I was eight or nine,” he says.  Not surprising then that Michael attended the Culinary Institute of America (CIA) in Hyde Park and interned at the DePuy Canal House in High Falls. “Interning is slavery,” Michael quips.  But he impressed the boss, John Novi, enough to become first Sous Chef and then Head Chef for two and a half years.  There he also met Amanda, a young waitress who became his wife.

After the Canal House Michael coordinated the openings  of two new restaurants, taking The Emerson and “Oriole 9, both in Woodstock, from concept through opening night in less than a year.  It was exciting and challenging, but such hard work that Michael vowed the next opening would be his own.

It took about eight months before Michael and Amanda, who is now a massage therapist at Mohonk, found the perfect venue; the Gagnes, owners of the popular Red Rooster, were looking to move on and the match was made.  Michael speaks with respect of Greg and Melissa Gagne. “The transition went smoothly and they were easy to work with. Great location, great little town.”  Michael’s dream began to take shape.

Up and running since last November, Michael likes cooking a variety of dishes.  He is particularly excited about using local produce and products—Full Moon Farm beef, maple syrup from Sugar Brook Farm in Kerhonkson, Widmark honey, apples and cider from Wright’s Farm, Monkey Joe coffee from Kingston and eggs from Brookside Farm on Albany Post Road.  He marvels at the local wineries, Tuthilltown distillery, and our local beef farms. The quality and availability of local produce gets Michael’s creative juices flowing.  “Just put a fresh local product in my hands and I’m happiest,” he says.  In fact, aware of the importance of apples to our area, Michael, Amanda and a group of friends printed out hundreds of varietal names and ultimately chose “Mio,”  a little-known apple.

Michael enjoys working with other local businesses and organizations and looks forward to Gardiner Day and the Cupcake Festival. He’s catering a Gardiner Association of Businesses event at town hall in April and has been patiently waiting for his liquor license in anticipation of opening for dinner.  There are plans for an event with Enthusiastic Spirits and Frawleigh and Rakow Insurance and Michael proudly states that he’s done receptions for up to 45. He’s also hosted an event for the Hudson Valley Seed Library, vegetable gardening being another of his passions.

Michael’s work ethic, for which he credits his hard working immigrant Italian family (his grandmother was born in Italy)  has served him well.  Michael’s family, which includes a twin brother in graduate school in L.A., supports his great adventure wholeheartedly.  “I’ve been doing this since I was a kid. It’s been a long time coming.  And best of all, my Mom is in awe!” Café Mio is open daily,  8:30 to 4:30, except Tuesdays.  255-4949 / www.miogardiner.com / contact@miogardiner.com.