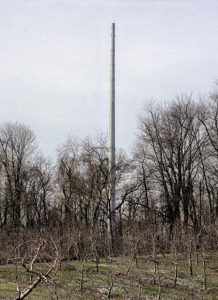 To recap, the quest for viable cell service in Gardiner began almost 15 years ago, with many attempts and many dead-end roads in between. A town law on cell towers was written (see Municipal Code, section 220-46 on the town website, townofgardiner.org). There was a major effort to find town-owned land that could support a cell tower, and at the same time provide a lease income for the town.

Unfortunately, after years of meetings and expensive due diligence to research possible sights, as well as a couple of lawsuits,  it turned out that the town didn’t own land that filled both the criteria of acceptable location and compatibility with the town’s cell tower law.

The Town Board revisited a 2001 proposal for a tower on a hill above Route 208 on Wright’s Farm. They then proceeded to completion with that plan.  The tower and concrete pad were installed almost a year ago by Wireless Edge, the consulting company that builds tower facilities and then markets them to providers. The first stop in confirming when it would be in action was contacting John Arthur at Wireless Edge. He referred me to Hank Vance, the town of Gardiner Building Inspector. Hank authorized a building permit on behalf of Verizon, applied for by Rob McCabe. I spoke to Mr. McCabe of Pyramid Network Services, who confirmed that Verizon planned to be online in early spring. John Arthur also confirmed that AT&T would be on in the spring as well.

It is wonderfully difficult to see the tower from the road. A  representative from Wright’s Farm took me on a tour through the orchard to see the tower first hand. We wound past lines of fruit trees and then, all of a sudden there it was, right in front of us, ready for action.