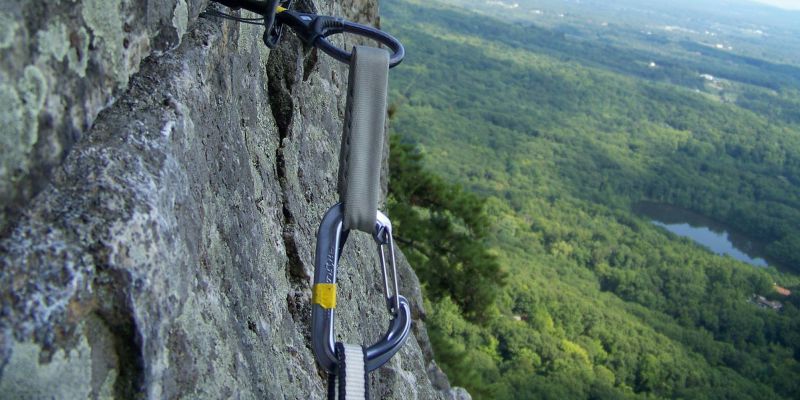 The Gunks were discovered for climbers in the late 1930’s by world renowned mountaineer, Fritz Wiessner. He, Hans Kraus, Bonnie Prudden and others then pioneered many of the finest routes here, and the three are considered heroes to this day.

Since those early days, free climbing—a form of rock climbing in which climbers use ropes and other equipment to protect against injury during falls, but not to assist progress—has become a mainstream sport.

Like many other sports, climbing takes place in an inherently dangerous environment. However, climbing is neither an art nor a science, but a combination of both. So how does a person learn to “climb it smart”?

There are few hard and fast rules, but every climb starts with a chain of interlocking safety procedures that are drilled into the psyche of most who climb regularly. For example, before even walking out the door, climbers check that the gear they are taking is functioning properly, and actually in the pack. They make sure they have enough water and food and a cell phone. At the base of the climb, both the lead climber and the 2nd climber unpack everything. They unfurl the rope, making sure it is free of knots. They inspect it, looking for damage. They check to see that safety harnesses are buckled correctly, that a climbing rope is attached correctly, and that it is tied securely to the harness of the leader. The checklist goes on. Seems like a lot, doesn’t it? However, regardless of one’s technical aptitude, climbing safety is the “smart” part of climbing.

But gaining the relevant experience presents the greatest risk, particularly when starting out. Reading about techniques can speed up the process, but practice, controlled progress and an enquiring attitude are the best ways to learn, and then with enough “data,” over time, critical thinking starts to kick in. One develops the ability to assess a situation and work out a solution based on knowledge and skill.

Improved technique also increases problem-solving ability, thereby increasing safety. Now that’s “smart” at its best. The risks generally lessen with experience, but climbing can never be totally safe. For many, though, part of the attraction is a sense of danger; to remove this risk would alter the activity itself.

Evidence that “Climb it Smart” is a do-able concept lives among us in Gardiner—aging athletes who have climbed for decades, are relatively in one piece, and have many interesting stories to tell. Most have passed on what they’ve learned to countless climbers who have come after them, and some still climb today well into their senior years. How is that possible, you might ask? Simply put, they love climbing and climb it smart.